Purpose: Pharmaceutical cocrystal is a multicomponent system in which an active pharmaceutical ingredient (API) and one or more coformers are presented in a stoichiometric ratio and bonded together via non-ionic interactions in a crystal lattice. Development of pharmaceutical cocrystal is important approach to optimize physicochemical properties of API molecules. The cocrystal formation is confirmed by analytical techniques including thermogravimetric analysis (TG), differential scanning calorimetry (DSC), X-ray diffraction (XRD)-DSC. As a tool for monitoring of cocrystal solid form changes, we focused on Raman spectroscopy using the low-frequency (LF) region (-200-200 cm−1) that is considered a higher discriminative measurement between solid forms compared to conventional Raman spectroscopies. LF-Raman spectroscopy can be provided information about crystalline structures by utilizing lattice vibrations and/or intermolecular vibrations (hydrogen bond, π-π interaction). In the study, we developed a novel anhydrous cocrystal of levofloxacin (LVFX) from a hydrated LVFX using a heating approach, and evaluated qualitatively solid form conversion of that cocrystal during heating process by using LF-Raman spectroscopy with hot-stage.


Methods: Equimolar (1:1mol ratio) quantities of LVFX hydrates and metacetamol (AMAP) were weighed and co-ground in a Shake Master neo grinder (Biomedical Science) at 1,500 rpm for 5 min. The high-temperature X-ray powder diffraction (XRPD) analysis with changing temperatures was performed by using an XRD-DSC module (Rigaku), which was operated at 50 kV and 300 mA, with Ni-filtered Cu Kα radiation (λ = 1.5408 Å). A heating rate of 2°C/min was used for all measurements. Analysis was carried out under a nitrogen flow (100 mL/min). The monitoring of thermal behavior was also conducted using a Raman spectroscope, LabRAM HR Evolution (HORIBA Scientific) coupled with a thermal stage (Linkam Scientific Instruments). The conventional Raman was operated at 1,064 nm from 200-3,300 cm-1. The LF-Raman was operated at 532 nm coupled with an ultra-low frequency accessory from -200-200 cm-1. Both had a spectral resolution of 1 cm-1.


Results: The first endothermic peak in the DSC curve was confirmed as associating with dehydration of LVFX. Typical diffraction peaks of the anhydrous form of LVFX in the XRPD pattern were appeared at 60°C. The diffraction peaks of AMAP were completely disappeared at 108°C. The new diffraction peaks were observed at 117°C. It was suggested that the cocrystal was formed around that temperature, since the exothermic peak in DSC curve was observed at 126°C. The XRPD pattern was turned to a halo at a temperature of more than 157°C (data not shown), suggesting melting of the cocrystal. The LF-Raman spectrum was able to distinguish the transition of solid state clearly in the range of 20 cm−1 to 70 cm−1. In contrast, the conventional Raman spectrum (greater than 200 cm−1) was not possible to show in detail. These results suggest that the Raman spectroscopy, especially by using the low-frequency region, is an effective method for rapid identification of solid state of LVFX/AMAP mixture during heating processes. In addition, the dehydrated LVFX in that analog mixture can be identified during heating from the diffraction pattern. The characteristic peaks of dehydrated LVFX was also observed in the LF-Raman spectrum.


Conclusion: Throughout the monitoring of thermal behavior of LVFX/AMAP mixture, significant temperature-dependent changes were observed in the LF-Raman spectrum. The results suggest that the LVFX/AMAP mixture has the potential for conversion to cocrystal after desorption of water from LVFX hydrates during the heating process. LF-Raman spectroscopy is very useful for detecting of the solid state conversion including dehydration and cocrystallization as same as other characterization tools. Furthermore, LF-Raman spectroscopy is also applicable to obtain crystalline structural information of physically unstable dehydrates in combination with XRPD analysis. 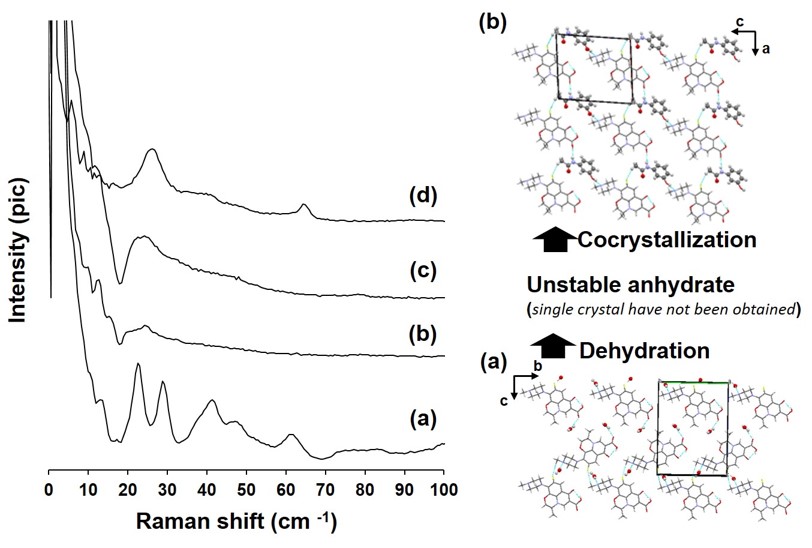 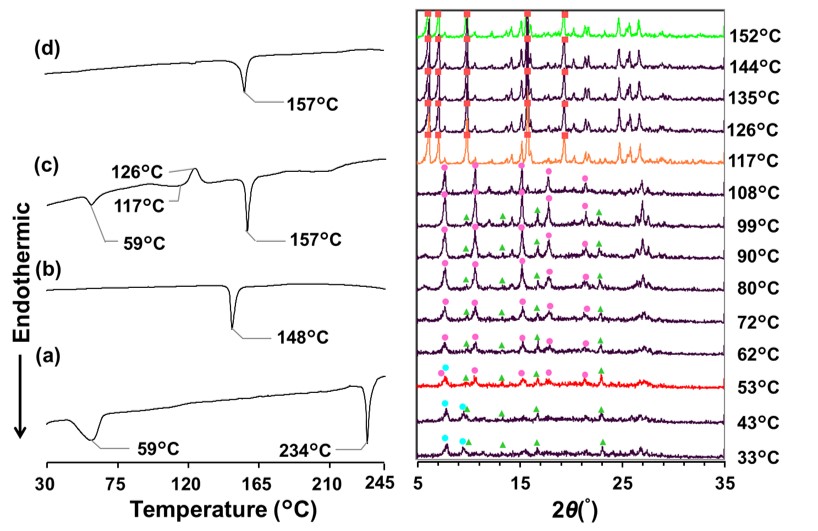