M1230-02-12 - Combined Effects of the Supersaturation Rates and Doses on the Kinetic-Solubility Profiles of Amorphous Solid Dispersions Based on Water-Insoluble PHEMA Hydrogels: Proof of Concept in Rats

Purpose: Formulating poorly water-soluble drugs using medium-insoluble hydrogels to obtain Amorphous Solid Dispersions (ASDs) is an emerging approach to tackle solubility-related bioavailability problems. Most recently, we have highlighted that one can significantly shorten or extend the duration of sustained supersaturation in the kinetic-solubility profiles of ASDs based on medium-insoluble hydrogel carriers by either adjusting the particle size or total dose (Schver & Lee, 2018). For example, it was shown that one could obtain a more sustained supersaturation through either increasing the particle size or lowering the total dose. The present study aimed to prove the concept that was previously demonstrated in-vitro by evaluating the effects of supersaturation generation rates and doses from Water-Insoluble Poly(2-hydroxyethyl methacrylate) (PHEMA) Hydrogels on the extent of absorption of a poorly soluble drug in rats.


Methods: PHEMA-hydrogel beads with crosslinker concentrations of 0.66 mol % were synthesized by a suspension-polymerization process based on previously reported protocols (Lee, 1983) using a stirring speed of 300 rpm to obtain particle size ranges similar to the ones used in the previous study (Schver & Lee, 2018). Fenofibrate (FNB) was chosen as a model drug for the study since it is a neutral (i.e., solubility will not change with the pH in the gastrointestinal tract), lipophilic drug (log p = 5.2) which is practically insoluble in water and that has been used, as a model drug in studies with similar purpose utilizing rats. The preparation of the ASD of FNB in PHEMA beads involved sorption from a concentrated drug solution prepared in a good swelling solvent followed by solvent evaporation to achieve desired the drug loading. In a parallel study, 25 overnight fasted Male Sprague-Dawley rats in the weight range > 380 g received gelatin mini capsules (Torpac, Fairfield, NJ, U.S.A.) filled with either a single dose (i.e., 1 mg) of crystalline FNB or amorphous FNB formulated with PHEMA-hydrogels beads with different particle size fractions (< 75,150-300 and 500-800 µm). To verify the effect of the total dose, another group received a different total dose of FNB (i.e., 0.5mg of FNB and particle size of 75 µm). Blood concentrations of fenofibric acid, the pharmacologically active metabolite of FNB, were monitored up to 24 h post-dose.


Results: The extent of absorption (AUC0–24h increased by 683.77%) of FNB was significantly enhanced following administration of the PHEMA hydrogel beads-based formulation when compared to the orally administered crystalline drug. In accordance with our previous findings (Schver & Lee, 2018), the in-vivo comparison of PHEMA-based ASDs (5.93% loading at 1 mg FNB dose) with different particle size ranges (< 75,150-300 and 500-800 µm) show that a combination of a slower rate of supersaturation generation with a sustained supersaturation as provided by solid dispersions based on hydrogels with intermediate particle size range improved the oral absorption of FNB as compared with the shorter sustained supersaturation profile of hydrogels with the smallest particle size range (Figure 1). This study also points out that there is a limit in terms of increasing the particle size range to obtain optimal in-vivo performance given the inferior oral bioavailability reached by the PHEMA-based ASDs with the largest particle size range. Our in-vivo results also show that decreasing the dose can indeed result in better oral bioavailability probably due to the attainment of a more sustained superstation profile as evidenced by the comparison between PHEMA-based ASDs containing 1 and 0.5 mg of FNB and particle size of 75 µm (Figure 2).


Conclusion: The results of this study demonstrate that a moderate decrease in drug release rate – and thus, a moderate decrease in the rate at which supersaturation is created – is beneficial to the absorption of FNB. Moreover, this study shows that it is indeed possible to obtain better in-vivo absorption by lowering the total dose of poorly-water soluble drugs when supersaturating formulations are employed as bioavailability enhancement strategies. 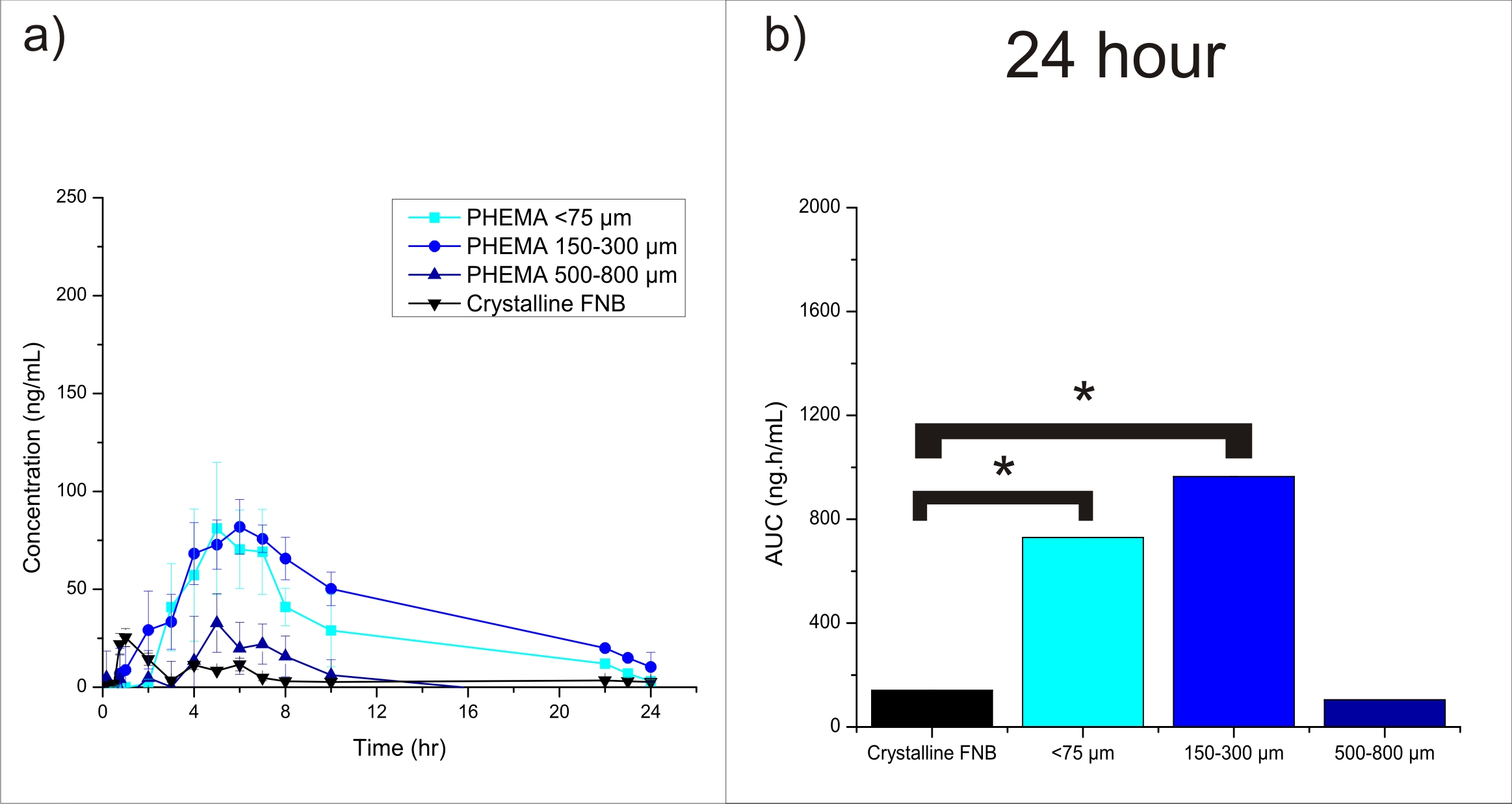 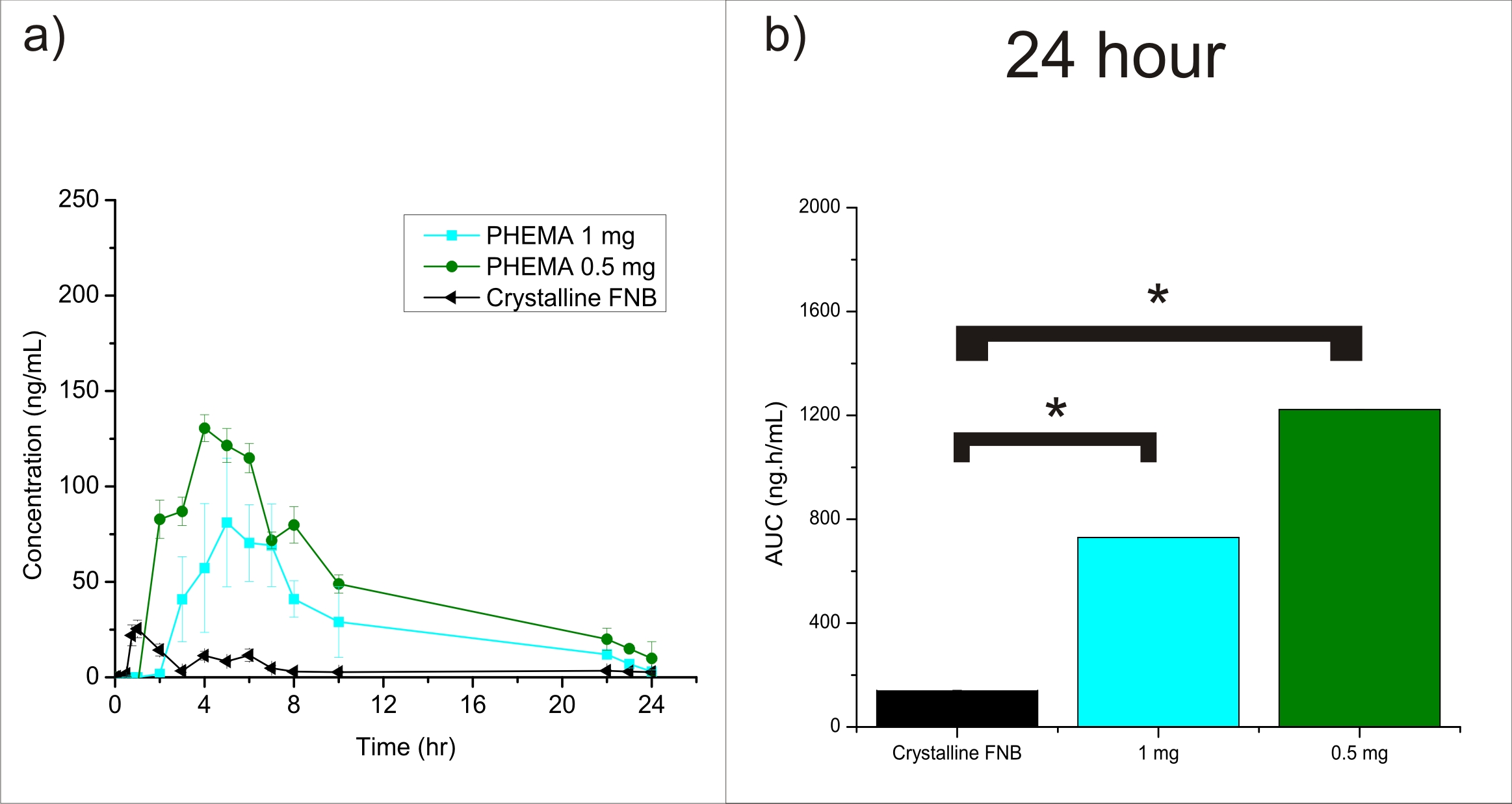