Purpose: Thermodynamic phase diagrams are powerful preformulation tools for the selection of the type and concentration of polymer required to formulate a stable drug-polymer amorphous solid dispersion using hot-melt extrusion (HME). It is a material-sparing technique that limits the total number of experiments required during preformulation. The objective of the present study was to construct a thermodynamic phase diagram of a model drug, mefenamic acid (MFA), with three commonly used thermoplastic polymers (Eudragit® EPO (EPO), Parteck® MXP (PVA) and Kollidon® VA64 (VA64)).


Results: The difference in the calculated values of Hansen solubility parameter between MFA-EPO, MFA-VA64 and MFA-PVA physical blends was found to be 0.31 MPa0.5, 3.01 MPa0.5 and 16.36 MPa0.5, respectively indicating the highest miscibility of MFA in EPO of the three polymers. This was also evident from the melting endotherms of drug-polymer blends where the melting point of MFA in EPO decreased considerable as compared to that in VA64 and PVA. This was possibly be due to lower Tg of EPO (55°C) which provided sufficient time for the MFA particles to dissolve into the polymer matrix of EPO. The weakly acidic nature of MFA and the basic nature of EPO had a potential to form hydrogen bonding interaction and form a stable solid dispersion. The value of Flory-Huggins interaction parameter, χdrug-polymer, was estimated using the melting temperature of various drug-polymer blends. The value of χdrug-polymer at the melting temperature of MFA was found to be -1.71 (r2 = 0.9603) for MFA-EPO, -1.51 (r2 = 0.9425) for MFA-VA64 and 0.40 (r2= 0.8776) for MFA- PVA indicating good miscibility of MFA with EPO. The Gibbs free energy of mixing (∆Gmix) plotted as a function of drug concentration in the blend and temperature showed that MFA was miscible in EPO at all volume fractions above 140°C indicating that MFA-EPO had an upper critical solution temperature. A plot of χ vs. 1/T for MFA-EPO system yielded a linear relationship across the experimental composition of 60-85% of EPO with an R2-value of 0.9708 with an entropic constant, A, of -15.60 JK-1 and an enthalpic constant, B, of 6763 J. The miscibility curve showed that ~10% w/w of amorphous MFA was miscible in EPO at 25°C. The Berghmans point for MFA-EPO system was present at a drug weight fraction of ~0.13 and temperature of ~55°C. This indicates that up to ~13% w/w of amorphous MFA can be kinetically stabilized by EPO at a temperature up to ~55°C. The predicted phase diagram was successfully validated above the glass transition temperature of MFA-EPO system using hot-stage microscopy which clearly distinguished the stable, metastable and unstable regions.


Conclusion: The study established a material-sparing technique for the prediction of physical stability of amorphous solid dispersions of MFA using solubility parameters, thermal analysis and Flory-Huggins theory. Based on the calculated solubility parameters and thermal analysis, it was observed that MFA had good miscibility in EPO as compared to VA64 and PVA. The information from the thermodynamic phase diagram can be used as a risk assessment tool in the formulation development of amorphous solid dispersions. 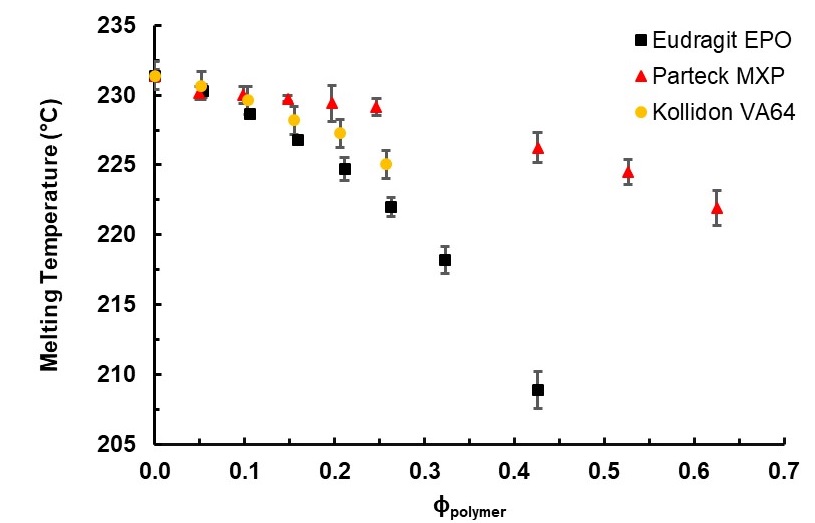