M1230-03-17 - A Novel Laser Diffraction Methodology for the Characterization of ASD Speciation Events - An Itraconazole: HPMC AS Case Study

Purpose: Biopharmaceutics Classification System (BCS) class II and IV drugs may be formulated as supersaturating drug delivery systems (e.g., amorphous solid dispersions [ASDs]) that can generate a supersaturated drug solution during gastrointestinal (GI) transit. Besides the increased solubility of the amorphous forms, other mechanism that contributes to the increased bioavailability of these forms is related to the formation of colloidal species. These species occur when the concentration of drug generated in solution exceeds the amorphous solubility during dissolution, resulting in a liquid-liquid phase separation (LLPS). This work intends to implement a screening methodology to understand the ability of a drug to form colloidal species in dissolution media and if they can be maintained without crystallization in the presence of a polymer. This screening tool is focused on following the colloidal formation and crystallization kinetics of itraconazole (model drug from BSC class II) in the presence of HPMCAS-L and HPMCAS-H (HPMCAS with varying ratios of succinoyl:acetyl groups), using a laser diffraction-based methodology. To confirm the crystallization phenomenon, UV absorption, polarized light microscopy and RAMAN spectroscopy were also used.


Methods: Colloids formation and crystallization monitoring using laser-diffraction: A spiking solution of itraconazole (ITZ) was prepared in dimethylformamide at 10mg/mL. Mastersizer 2000 (Hydro 2000S, Malvern Panalytical, Netherlands) dispersion unit was filled with 150 mL of either biorelevant media (FaSSIF, pH=6.5) or FASSIF containing hypromellose acetate succinate (HPMCAS-L and HPMCAS-H). Target concentration of ITZ was 0.2 mg/mL (~20 fold above amorphous solubility). Polymer concentration was adjusted to mimic the selected ITZ:HPMCAS ratios (15:85, 25:75 and 35:63). Particle-size was monitored after ITZ spiking to the biorelevant medium during 120 minutes (2100 rpm) with measurements every 14 seconds. Presence of crystallization was confirmed by analyzing aliquots from the dispersion unit after 120 minutes by polarized light microscopy (PLM) and RAMAN spectroscopy (WITec, Germany).

UV spectroscopy: 60 µL of 10 mg/mL ITZ in DMF was spiked into 3 mL of FASSIF either bare or supplemented with different concentrations of HPMCAS-L/HPMCAS-H in a 12-well microplate (ITZ:HPMCAS ratios of 15:85, 25:75 and 35:65, ITZ concentration 0.2 mg/mL). Samples were incubated with a constant orbital shaking and analyzed throughout 6h at 350/650 nm on a UV multiwell plate reader (Synergy, HTX multi-mode reader)


Results: The generation of colloidal species of ITZ when spiked beyond the LLPS in FaSSIF was monitored in a Mastersizer2000. Figure 1A shows the particle size distribution of Itraconazole when suspended in FaSSIF for 2h. A submicron population with a d(0.5) of 0.2 µm was primarily formed. However, after ~50 minutes, precipitation occurred as observed by the onset of a new population (Figure 1A). An increasing of obscuration also accompanied this precipitation phenomenon. The collected precipitates were observed by PLM and Raman imaging. Birefringence was observed in PLM (Figure 1B) emphasizing crystallization of ITZ. Raman spectra of the precipitated material corroborated the match to the spectrum of crystalline ITZ. Furthermore, bands from FaSSIF powder spectrum (Figure 1D) were also observed, suggesting that one or more elements from this complex medium may also have precipitated together with ITZ.

Figure 2 shows how the d(0.1), d(0.5) and d(0.9) of ITZ varies when spiked in FaSSIF with either HPMCAS-H or HPMCAS-L. A colloid population with a d(0.5) of ~0.19 µm was formed for all the different concentrations while being able to inhibit ITZ crystallization for the tested time-frame. The ability of HPMCAS polymers of inhibiting the crystallization of amorphous drugs in solution is well known and it has been attributed to the steric hindrance and hydrophobic interactions that these polymers may have with hydrophobic APIs. For HPMCAS-L, a slight increase of colloid size and obscuration was also observed with time (Figure 2A/B). A possible rationale for this observation may be correlated with HPMCAS-L lower hydrophobic substitution profile (lower acetyl:succinyl ratio). These results may point to a correlation between HPMAS hydrophobicity profile and ITZ supersaturated colloids stabilization capacity.

UV analysis was also monitored as an orthogonal method by solvent shift spiking to confirm the prior events. The bare ITZ spiked into FaSSIF crashed after 2 hours (Figure 3, reduction of ITZ specific 350 nm λ, scattering increase at 650 nm where ITZ has no absorption). Different profiles were observed according to the HPMCAS grade. The initial increase of absorbance in HPMCAS-L and FaSSIF at 350 and 650 nm could be attributed to a slight increase of colloid particle size (coalescence) or colloid concentration increase (nucleation) as observed in the laser diffraction methods. Further investigation still needs to be conducted to confirm these phenomena.


Conclusion: Herein we describe a new methodology based on laser diffraction to monitor in real time a drug’s ability to form and maintain colloidal species throughout its supersaturated state. Such technology can be applied in the early stage development of amorphous solid dispersions as such events have been correlated with a significant increase of their in vitro and in vivo dissolution performance. 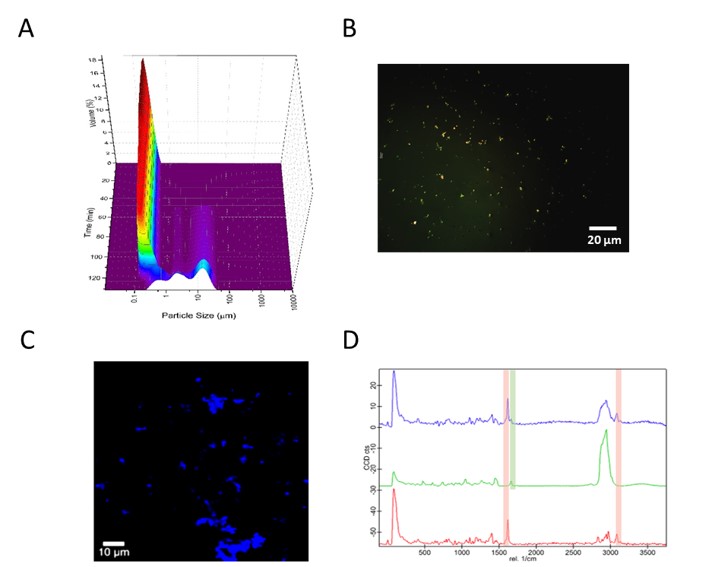 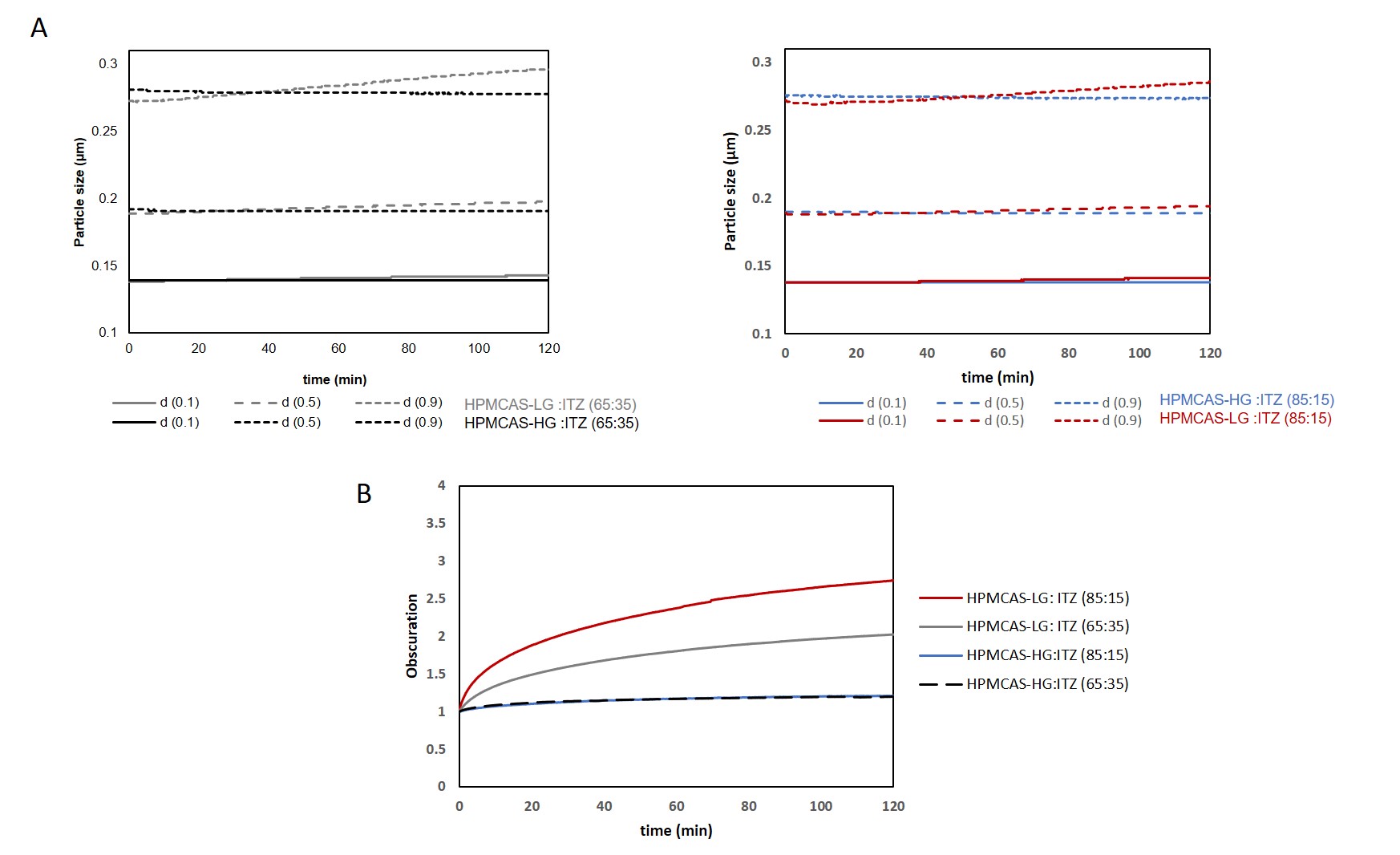