Purpose: Three-dimensional printing (3DP) has demonstrated a great potential for multi-material fabrication due to its capability for printing bespoke and spatially separated material conformations. Such a concept could revolutionize the pharmaceutical industry, enabling the production of personalized, multi-layered drug products on demand, which could improve treatment outcomes for diseases with complex pathologies. Here, we develop a novel stereolithographic (SLA) 3DP method that, for the first time, can be used to fabricate multi-layer constructs (polypills) with variable drug content and/or shape.

Methods: Using SLA 3DP, a multilayered polypill containing six drugs (10% w/w from each drug), including paracetamol, caffeine, naproxen, chloramphenicol, prednisolone and aspirin, was printed with different geometries (cylindrical and ring-shaped) and material compositions (no diluents and with addition of PEG 300) [1]. The solid states of the drugs were characterized using x-ray powder diffraction (XRPD)and their distribution within the printlets was visualized using Raman microscopy. The effect of geometry and excipient addition on drug release was evaluated using a USP-II apparatus (dynamic pH conditions). Drug loading was evaluated using HPLC.


Results: For the first time, it was possible to modify a commercial SLA 3D printer in order to fabricate a series of polypill printlets containing six drugs. Raman microscopy showed that, whilst separate layers were successfully printed, several of the drugs diffused across the layers depending on their amorphous or crystalline phase (Figure 1). Indeed, four of the drugs (aspirin, paracetamol, naproxen and chloramphenicol) were found to be in the amorphous phase due to the absence of sharp peaks in the XRPD spectra (Figure 2). Conversely, prednisolone and caffeine were found to be present in the crystalline phase. The printed constructs demonstrated excellent physical properties and the different material inclusions enabled distinct drug release profiles of the six actives within dissolution tests. For polypill type I (standard cylindrical shape and no diluents), none of the drugs reached 100% release after 20 hours (range 22% - 80% release). In order to increase dissolution rate, polypill type II was designed to have a ring-shaped geometry in order to increase the formulation surface area (and hence dissolution rate). The increased exposure to the dissolution medium enhanced the release rates of the water-soluble drugs, however, it did not significantly change the drug release profiles of naproxen and prednisolone due to their low water solubility. As such, polypill type III (ring-shaped), which included 50% PEG 300, a commonly used a solubilizing agent in oral formulations, was formulated and designed in order to evaluate the impact of a diluent on dissolution. For the majority of drugs, the addition of PEG 300 increased drug release substantially compared with polypill type I (for paracetamol, caffeine and aspirin ~100% release was achieved after 20 hours, and for chloramphenicol and naproxen release was increased to >80%). For prednisolone, drug release was increased to 45% however did not achieve complete release after 20 hours.


Conclusion: In this work, we demonstrated that multi-layered polypills containing different active ingredients could be fabricated using SLA 3DP. Using this technique, a number of different polypill geometries (cylindrical and ring-shaped) and formulation compositions (no diluents and with addition of PEG 300) were produced that demonstrated acceptable physicochemical characteristics and differing drug release profiles. This shows the feasibility of this technology as an innovative platform for multi-drug therapy production, facilitating a new era of personalized polypills. 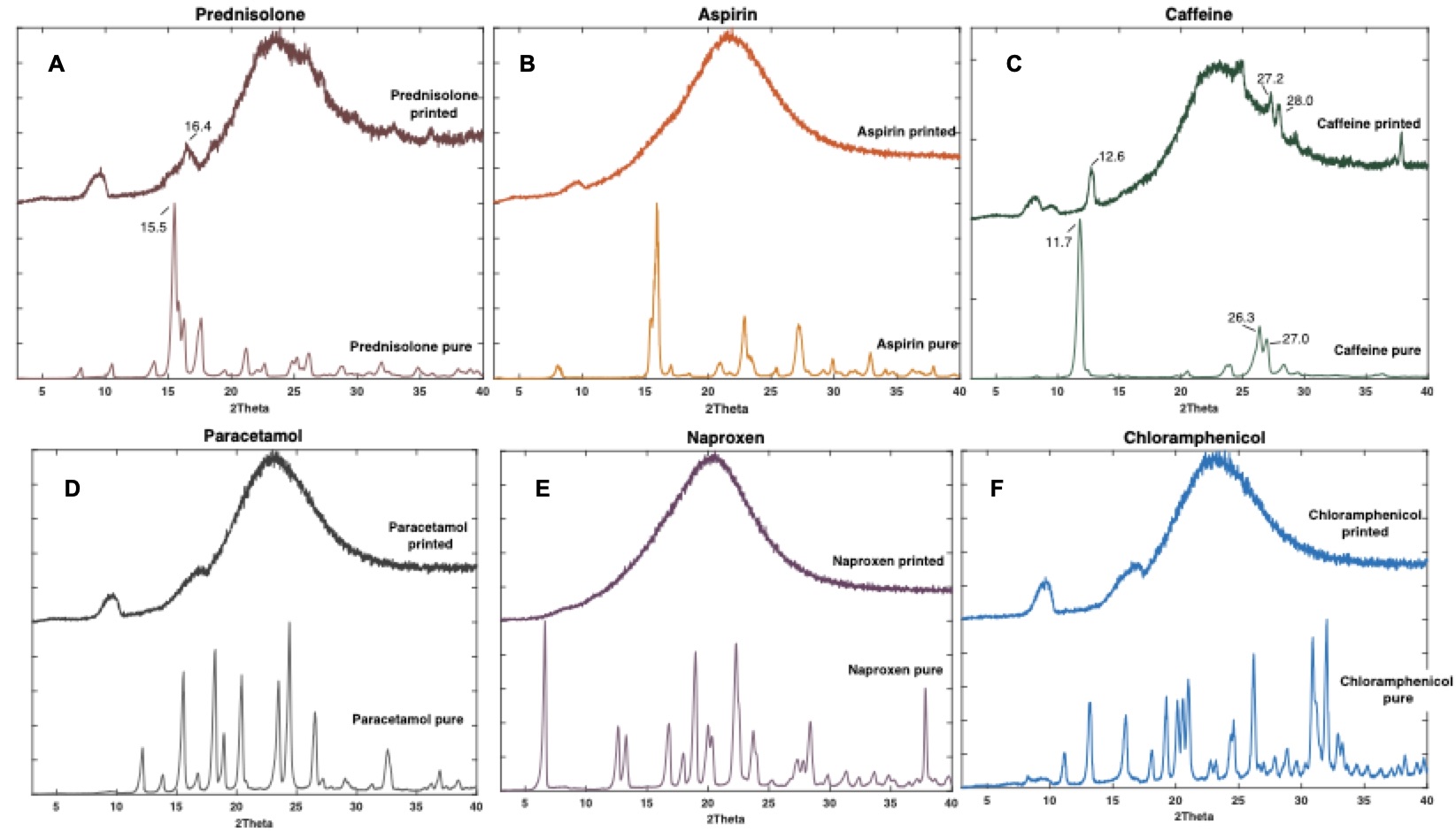 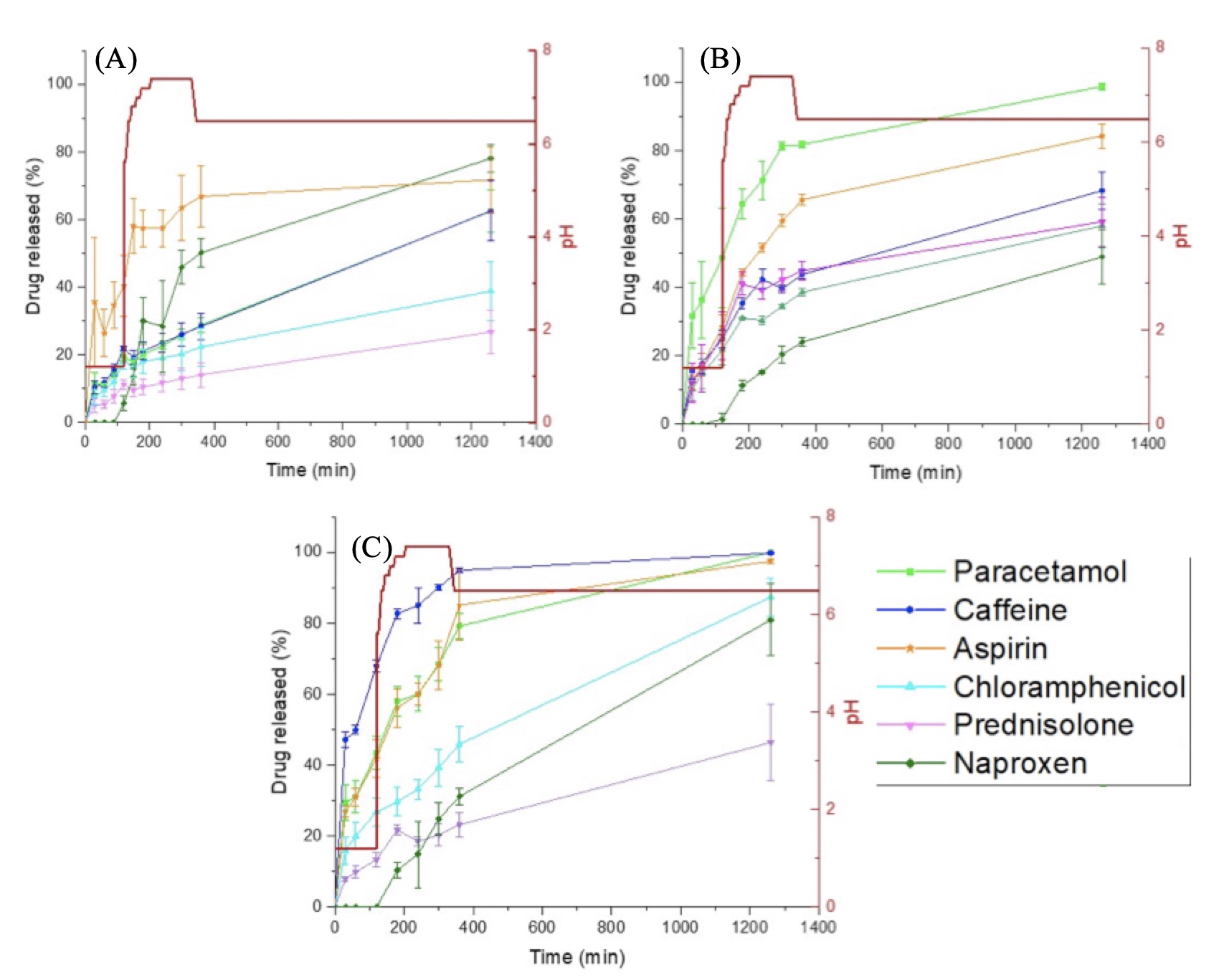