Purpose: We synthesized a novel macromolecule, a bio-based polyol containing urethane bonds, polyol-urethan (POU) that can be used as a nanoparticulate carrier to enhance the bioavailability of olanzapine (Oln). The new macromolecule drug carrier is an amphiphilic polyol containing urethane bonds that was prepared using cyclocarbonate and amines in the absence of toxic isocyanates. Due to its low critical micelle concentration (CMC), spherical Oln nanoparticles (Oln-NPs) and high barrier permeability, the POUs are able to offer an improved biodistribution for therapeutic agents, minimizing unwanted side effects via preferential accumulation at the target site1-2.


Methods: The biodegradable and biocompatible hyper-branched POU containing several hydroxyl and urethane bonds, was synthesized via an easy method of cyclic carbonate ring opening reaction followed by ethanol amine addition. The chemical and thermal properties of the polyol-urethane were characterized by 1H-NMR, 13C-NMR, FTIR, and TGA. The Oln-NPs were then prepared using a co-precipitation method, and their size and morphology were determined using DLS and SEM, respectively. In-vitro degradation, in-vitro drug release, in-vivo and their kinetic study were carried out to determine the ability of the POU for the sustained delivery of Oln.


Results: Given the 1HNMR data, the elimination of carbonate groups on the sunflower oil at 4.4-4.9 ppm and the appearance of the urethane groups indicated the successful synthesis of the POU. The low CMC value (2.17× 10 -4 mg/ml) demonstrated that the micelles were stable against dilution. When 1 mole of carbonated sunflower oil (1,179 g) reacted with 5 mole of ethanol diamine (305.25 g), the bio content of the POU was found theoretically high at 83.87%. The loading efficiency and loading capacity of the Oln-NPs were obtained 83±4.5% and 12.5±0.6%, respectively indicating that the Oln was effectively loaded into nanoparticles. The in-vitro release of Oln from the Oln-NPs was approximately 82±3% after 168 h (7 days). In-vitro drug release from nanoparticles (90±0.43 nm in diameter) followed a Higuchi release mechanism showing an initial burst release followed by a sustained release (82 ± 3% after 168 h). At higher concentrations of 1 and 5 mg/ml, the cell-viability was increased to 81.77±5.1 and 73.87±4.2%, respectively after 7 days (Figure 1). The initial Oln concentration at 30 min for Oln suspension was higher than Oln concentration that was released from the Oln-NPs. The MRT and t1/2 for the Oln-NPs were 1.51±0.23 and 0.43±0.029 for Oln-NPs, respectively. The POU microcrystalline structure containing urethane and ester bonds hindered the fast release of Oln and led to a sustained release of drug and its improved bioavailability (Figure 2).
Fig. 2. Concentration–time profiles for the Oln-NPs and Oln-suspension.


Conclusion: Given the results of this research, the bio-based POU is a safe drug carrier due to bio-based materials used in its preparation. Furthermore, the POU can be used as an effective carrier to enhance the bioavailability of Oln and potentially other hydrophobic drugs. 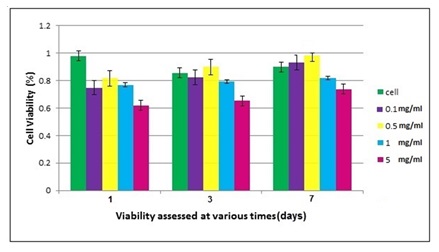 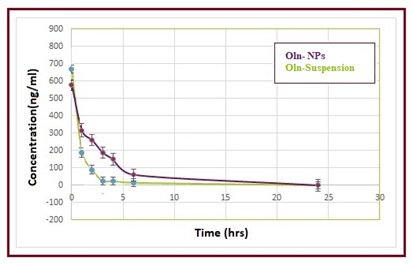