Purpose: This project highlights USP’s commitment to supporting the US FDA implementation strategies of the Three R (Replacement, Reduction and Refinement) Alternatives Initiative for the ethical treatment of animals used in scientific studies1, and aligns with the approaches taken by industry in designing drug studies to replace, reduce or refine the use of animals in testing. In this study, we investigated the adoption and incorporation of a cell-based bioidentity test for Insulin Lispro and Insulin Glargine in the USP General Chapter < 121 > Insulin Assays. Currently, the procedure describes only an in-vivo rabbit blood sugar test, where the biological activity of an Insulin batch is compared to an Insulin standard to evaluate bioidentity for batch release. USP received a submission for a validated, FDA approved Insulin Lispro and Insulin Glargine in vitro cell-based bioidentity test as an alternative approach which was recently proposed in PF 43(4). The assay itself measures the first step in the Insulin signaling cascade, where binding of Insulin to an Insulin receptor induces phosphorylation. Based on information provided by the sponsor, in-vitro relative potencies [EC50rel] and potency values [U/mg] of newly produced batches of Insulin Lispro and Insulin Glargine were shown to be comparable to potency results determined with the in-vivo rabbit blood sugar test. In the interests of aligning with the US FDA governance policies as well as updating USP-NF methodologies, the USP Biologics Laboratory in the US has evaluated and embraced the submitted Insulin In-Cell Western method.


Methods: The In-Cell Western (ICW) Assay is an immunocytochemical assay in a microplate (96 or 384 well plate) format using a suitable cell line over-expressing human insulin receptor. CHO cells stably expressing human Insulin receptor (Flp-IN-CHO-INSR) are seeded into wells of the microtiter plate and treated with various amounts of Insulin Glargine or Insulin Lispro. When Insulin binds to the receptors, it triggers auto-phosphorylation of tyrosine residues on the receptor, where phospho-tyrosine residues are specifically recognized by a primary antibody followed by visualization with a secondary antibody tagged with a fluorescent dye using specialized imaging instrumentation. A simultaneous DNA and/or whole cell staining using a fluorescent dye at a different wavelength enables normalization of the results to the cell number. The amount of fluorescence response will vary along with the concentration and/or potency of the insulin applied so that a dose response curve can be generated to assess the Insulin’s bioactivity.

Figure 2. Representative Analysis of ICW Assay Data: Dose-Response Curves, EC50 and Relative Potencies. Potency (EC50) was calculated from a binding curve generated by plotting the processed data signal [%] for the standard solution and sample solutions against their concentrations with a 4 parameter logistic regression (4-PL free model). Titration curve of triplicates for Standard solutions and Sample solutions was generated by plotting the processed raw data against the concentration of the respective solution with the 4-PL constrained model to determine the parallelism and relative potency of Insulin Glargine.


Conclusion: In response to the US FDA’s promotion of and industry’s trend towards increased usage of cell-based bioassays as a more ethical alternative which supports the Three R (Replace, Reuse or Refine) Principles, the United States Pharmacopeia has taken on the task of adopting and incorporating the technique within its compendial methods.

This study has demonstrated one such example whereby potency testing can be performed utilizing the In-Cell Western (ICW) technology as an in-vitro cell-based bioidentity test for Insulin Lispro and Insulin Glargine as a more ethical alternative to the in-vivo rabbit blood sugar test. Establishment of this assay as part of the repertoire of expertise not only brings new technology to the USP Biologics Laboratories, but provides a far more targeted and standardized means of measuring potency compared to the animal assay and is reflective of industry current best and most ethical practices. 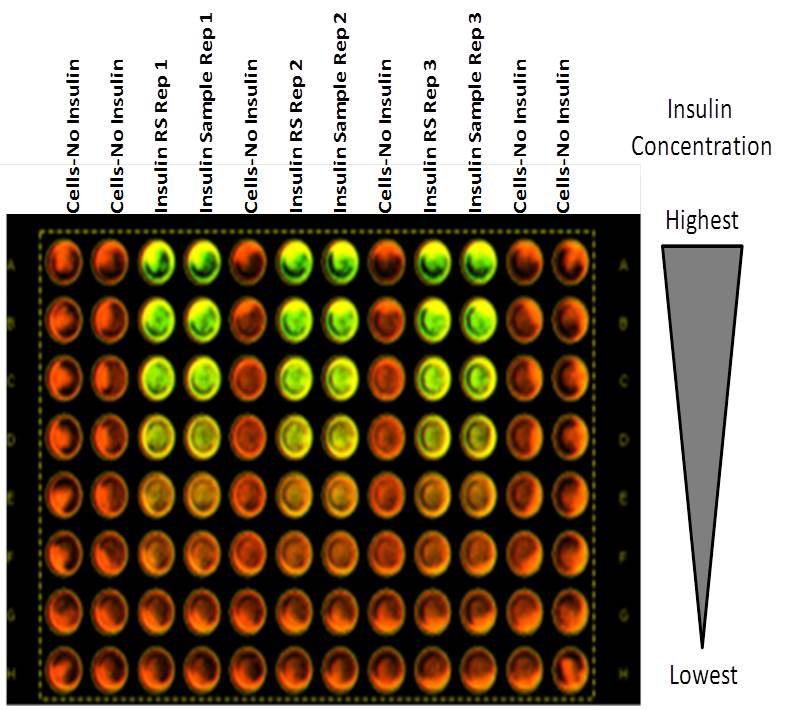 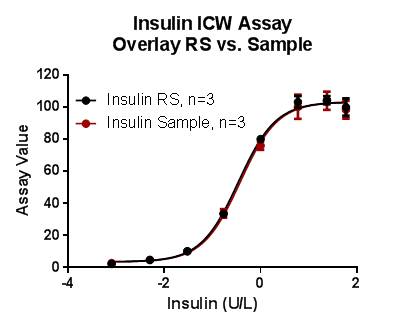