Purpose: 5-Aminosalicylic acid (5-ASA) is used as first line therapy in patients with ulcerative colitis for induction and maintenance of remission. Since 5-ASA is well absorbed from the small intestine, pH-dependent and controlled release formulations of 5-ASA have been developed and used in clinical for the purpose of minimizing the systemic absorption. However, its delivery efficiency to local inflamed colonic sites is still low. This nonspecific distribution of 5-ASA in the colon would be responsible for the increase of dosage and resultant production of adverse effects, such as nephrotic syndrome, myopericarditis and fever. Therefore, a new approach for the specific accumulation of 5-ASA in inflamed colonic sites is needed. It has been reported that the intestinal H+-coupled oligopeptide transporter 1 (PEPT1) is hardly expressed in the colon, whereas its expression is induced in the colon under conditions of chronic inflammation, such as inflammatory bowel disease (IBD). 1 Therefore, targeting PEPT1 would be useful for improving delivery efficiency of 5-ASA to the inflamed local colonic sites. In this study, we synthesized dipeptide-like 5-ASA derivatives by conjugating various amino acids, and evaluated their transport and degradation characteristics via PEPT1 in Caco-2 cells.


Results: The degradation of 5-ASA derivatives coupled with glycine, lysine, glutamic acid, valine and tyrosine into NH2-group followed first-order kinetics in Caco-2 homogenates. Their half-lives (t1/2) were about 199 min, 3.2 min, 136 min, 30 min and 53 min, respectively. On the other hand, no significant degradation was observed in the derivatives coupled with amino acids into COOH-group. Then, we evaluated and observed that the uptake of [3H]Gly-Sar, a PEPT1 selective transport substrate, was inhibited by all the 5-ASA derivatives in a concentration-dependent manner. In addition, the uptake of 5-ASA derivatives was higher at pH 6.0 compared with pH 7.4. Among the derivatives, the transport of only Gly-ASA, Glu-ASA and Val-ASA was inhibited by Gly-Sar at a concentration-dependent of manner, and their IC50 values were 3.4 mmol/L, 4.6 mmol/L and 10.2 mmol/L, respectively. Moreover, as shown in Fig. 2, the transport of these derivatives was saturable (Km = 1.3 mmol/L, 1.0 mmol/L and 0.6 mmol/L, respectively). These results suggest that Gly-ASA, Glu-ASA and Val-ASA are recognized by PEPT1. We next evaluated the inhibitory effect of Val-ASA on the uptake of Gly-Sar in Caco-2 cells, in order to further identify the form of inhibition of amino acid-ASA derivatives against Gly-Sar uptake into Caco-2 cells. In consequence, Vmax value of Gly-Sar uptake was not significantly changed by the addition of Val-ASA, whereas Km value was shifted from 2.1 mmol/L to 10 mmol/L. From these results, each Km values of Gly-Sar and Val-ASA uptake are correspond with each Ki value, suggesting that these substrates are transported by same transporter, PEPT1. Finally, Gly-ASA, Glu-ASA and Val-ASA induced high inward currents in PEPT1-expresing oocytes (44%, 57% and 60% normalized by Gly-Sar), compared with Lys-ASA and Tyr-ASA (less than 10%) (Fig. 3). These results indicate that Gly-ASA, Glu-ASA and Val-ASA are transported by PEPT1, whereas Lys-ASA and Tyr-ASA have low affinity with PEPT1.


Conclusion: 5-ASA derivatives coupled with amino acids into its NH2-group have the different affinity to PEPT1. Among them, Gly-ASA, Glu-ASA and Val-ASA have superior affinity with PEPT1. These substrates would be capable of accumulating local inflamed colon tissue and improving therapeutic efficacy of 5-ASA. Since PEPT1 is highly expressed in small intestine epithelial cells, it is necessary to exploit colon selective delivery technique for avoiding the absorption from small intestine. We are now preparing the 5-ASA derivatives-incorporated chitosan capsule and evaluating its therapeutic effect in rat colitis. 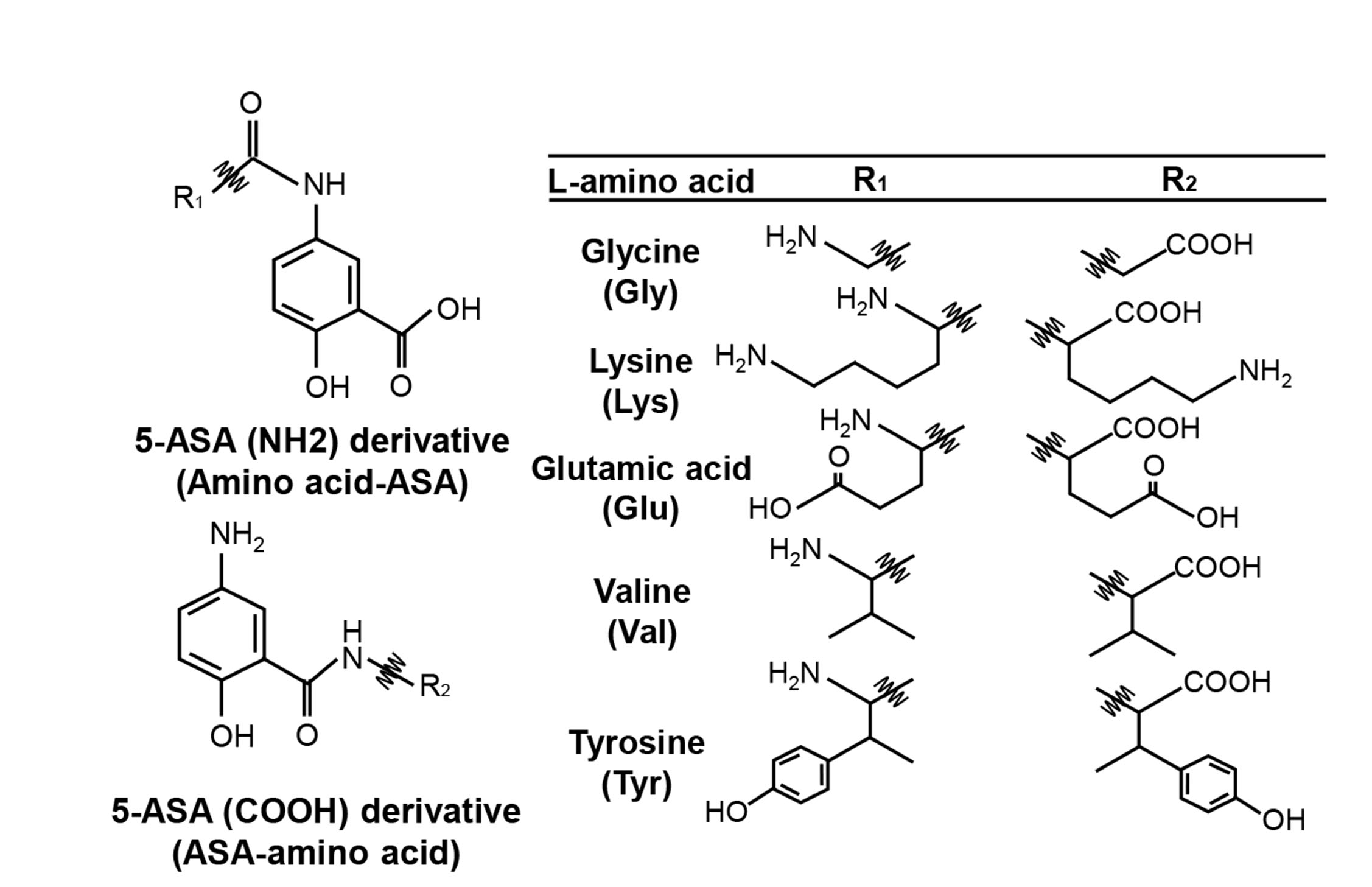 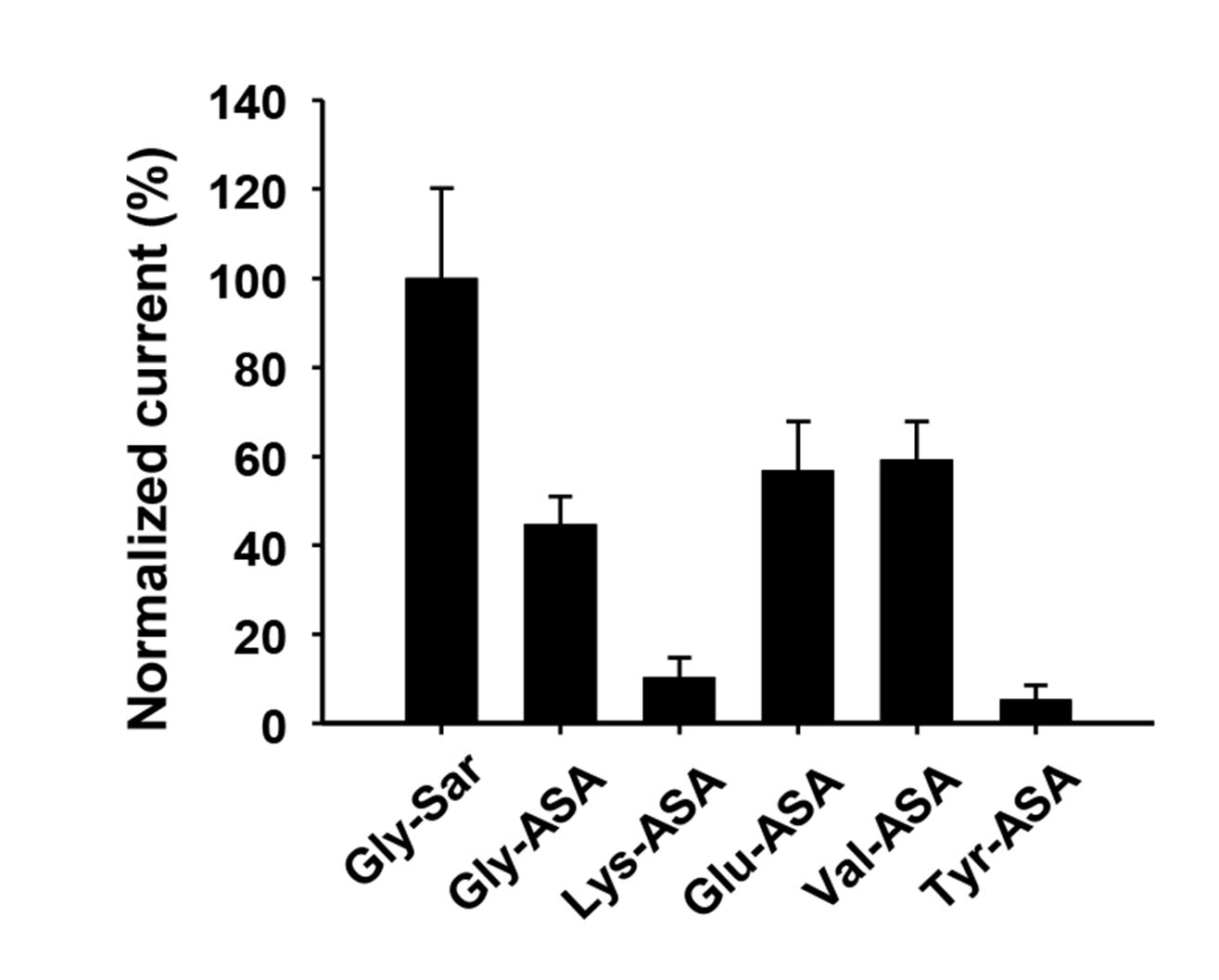