Methods: The water phase consisted of a suitable amount of leuprolide and 300 bloom type B gelatin in 1 mL of water and was maintained at 60°C. PLGA 75/15 (acid capped, Mw ~ 13 kDa) was dissolved in methylene chloride (DCM) at a final concentration of 50–300 mg/mL. The water phase and the oil phase were mixed by vortexing for 20 s and then emulsified for 2 min using a homogenizer at a speed of 15000 rpm to form a W/O emulsion. The obtained W/O emulsion was cooled in an ice-bath for 1 min and then subjected to spray-drying by a ProCepT 4M8-TriX spray dryer. The spray-dried crude powder was rinsed three times with 50 mL of cold water at 4°C and centrifuged at a speed of 4000 rpm to wash off unencapsulated drug from the microsphere surface. The microspheres were freeze-dried under reduced pressure for at least 48 h. Preparation processes can be seen in Fig. 1. Particle size was determined by laser diffraction using a Master Sizer 2000. Drug loading was determined after extracting the peptide and analysis by UPLC. Amino acid analysis was used to determine gelatin content. Long-term release of leuprolide from microspheres was conducted in PBS + 0.02%Tween 80 + 0.02% sodium azide at 37 °C while monitoring drug content by UPLC after solution replacement. During this period, Molecular weight (Mw) decline, water uptake, mass loss, and dry/hydrated Tg were also determined by GPC, gravimetry, and modulated DSC, respectively.


Results: Microencapsulation was highly efficient for leuprolide ranging from 70-90% encapsulation efficiency (EE) and 9.0-11.0% drug loading. Gelatin loss was negligible (EE = 80% to 100 %) with loading ~1.7% similar to the LD. The highest Cfeed (30%) caused a serious decline in the yield (~33.4%) and a significant increase in particle size and irregular morphologies. Cfeed displayed a pronounced impact on the drug loading (p< 0.001), and the lower the Cfeed, the lower the drug loading. Altering Tinlet from 80°C to 50°C seemed to have less of an effect on the microsphere size distributions were similar under different Tinlet values. Generally, most spray-dried, drug-loaded microspheres had higher residual DCM or water content than commercial products or empty microspheres. Spray-dried microspheres resulted in similar Tg values, around 47.5-48.5°C, which were significantly lower than the commercial product (p< 0.001). The LD generally displayed a slightly a higher long-term release than that of spray-dried microspheres. It is obvious that Tfeed 13°C, 25°C and 37°C (especially 25°C) had relatively lower overall release rates. The mass losses and Mw changes were similar among spray-dried microspheres and were slower compared to the commercial product. Upon incubation with release media, all microsphere Tg values similarly increased (~50°C) before declining to differing values (42-46°C) through day 42. 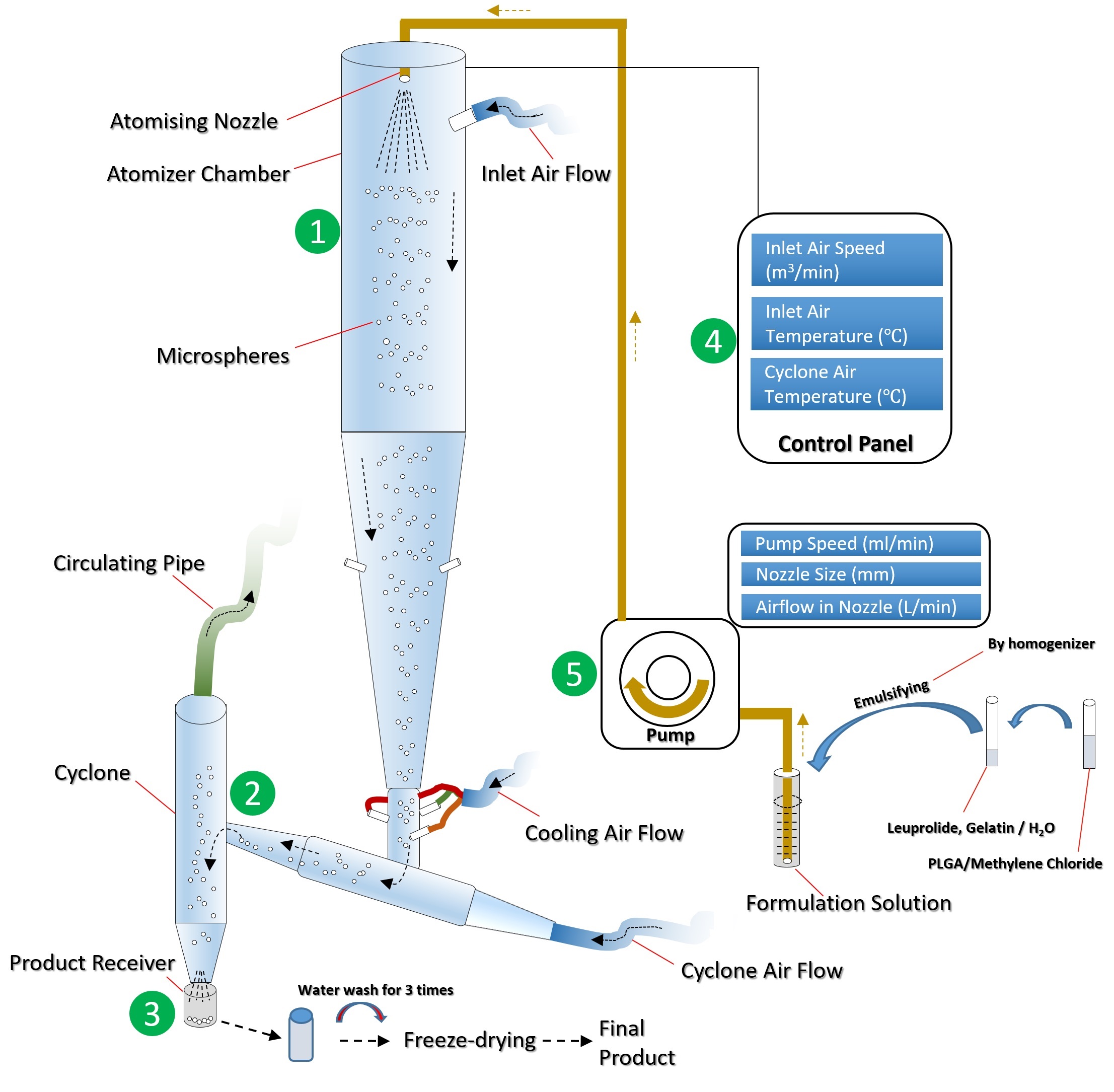