Purpose: Exparel® is a multivesicular liposome formulation of bupivacaine approved by FDA for local analgesia. In Exparel® formulation, bupivacaine is encapsulated in non-centric inner water chambers separated by lipid membranes, resulting in a sustained drug release profile. Although Exparel® are of much interest to generic companies, its complex structure poses challenges to the development of generic versions. Particularly, a robust in vitro drug release assay for Exparel® has been lacking, creating obstacles for comparability studies between the generic and the reference product. In the present work, we developed a series of analytical methods to characterize Exparel® in terms of particle size, drug and lipid contents. We further developed the in vitro drug release assay by optimizing the experimental set-up, dilution factors and release media. The optimized in vitro drug release assay can be used for in vitro equivalency evaluations and quality control tests.


Methods: Exparel® (bupivacaine liposome injectable suspension) was purchased from Research Pharmacy of University of Michigan Health System. The particle size distribution was determined using Malvern Mastersizer 2000. The bupivacaine content was determined using UPLC by a HILIC column. Lipid components including 1,2-dipalmitoylphosphatidylglycerol (DPPG) and 1,2-dierucoylphosphatidylcholine (DEPC) and tricaprylin were quantified by LC-MS with C4 column. Three experimental setups for in vitro drug release assays were designed and tested. For the rotator and shaker method, Exaprel® formulation was diluted with PBS (pH 7.4) for 50 times. The diluted formulation was put in centrifuge tubes which were either fixed on a vertical rotator with the speed of 15 rpm for the rotator method, or put on a horizontal shaker with the speed of 80 rpm for the shaker method. For the mesh-tube method, 5 mL undiluted Exparel® formulation was put into a nylon monofilament mesh tube with 1 µm pore size. The mesh tube was inserted into a glass bottle filled with 245 mL PBS (pH 7.4) which was put in an incubating shaker of 80 rpm/min. All experiments were conducted at 37 °C. At the predetermined time points, the samples were collected, and the released bupivacaine was separated and quantified. The morphology of Exparel® liposomes during the release process was visualized by a microscope. The selected experimental setup was further optimized in terms of release media and dilution factors. The optimized rotator method with the dilution factors of 50 and PBS (pH 7.4) release media was then used to determine the in vitro drug release kinetics from four different lots of Exparel® formulations.


Results: Exparel® multivesicular liposomes have a volume weighted mean particle size of 29.8 um. The bupivacaine and lipid contents matched well with the value stated in the package insert. For in vitro drug release assays, shaker- and mesh-tube facilitated experiment setups resulted in less than 20% drug release while the rotator-facilitated experiment setup led to 70% drug release at 24 h time point (Fig 1. A), indicating that mechanical agitation facilitates the destabilization of multivesicular liposomes and accelerates the drug release. The dilution factors and the release media were further optimized for the rotator method. A higher dilution and use of acidic release media resulted in an accelerated drug release (Fig 1. B). Supplementing release media with 1% BSA reduced the drug release rate, which might be attributed to the reduced particle collision due to the increased viscosity of BSA containing release media (Fig 1. C). All four lots of Exparel® formulation showed similar in vitro release profiles determined by the optimized drug release assay (Fig 2).


Conclusion: We established analytical methods to characterize Exparel® bupivacaine multivesicular liposomes in terms of particle size distribution, drug and lipid contents. A rotator-facilitated in vitro drug release assay was developed, which could be useful for in vitro equivalency studies and quality control purposes. 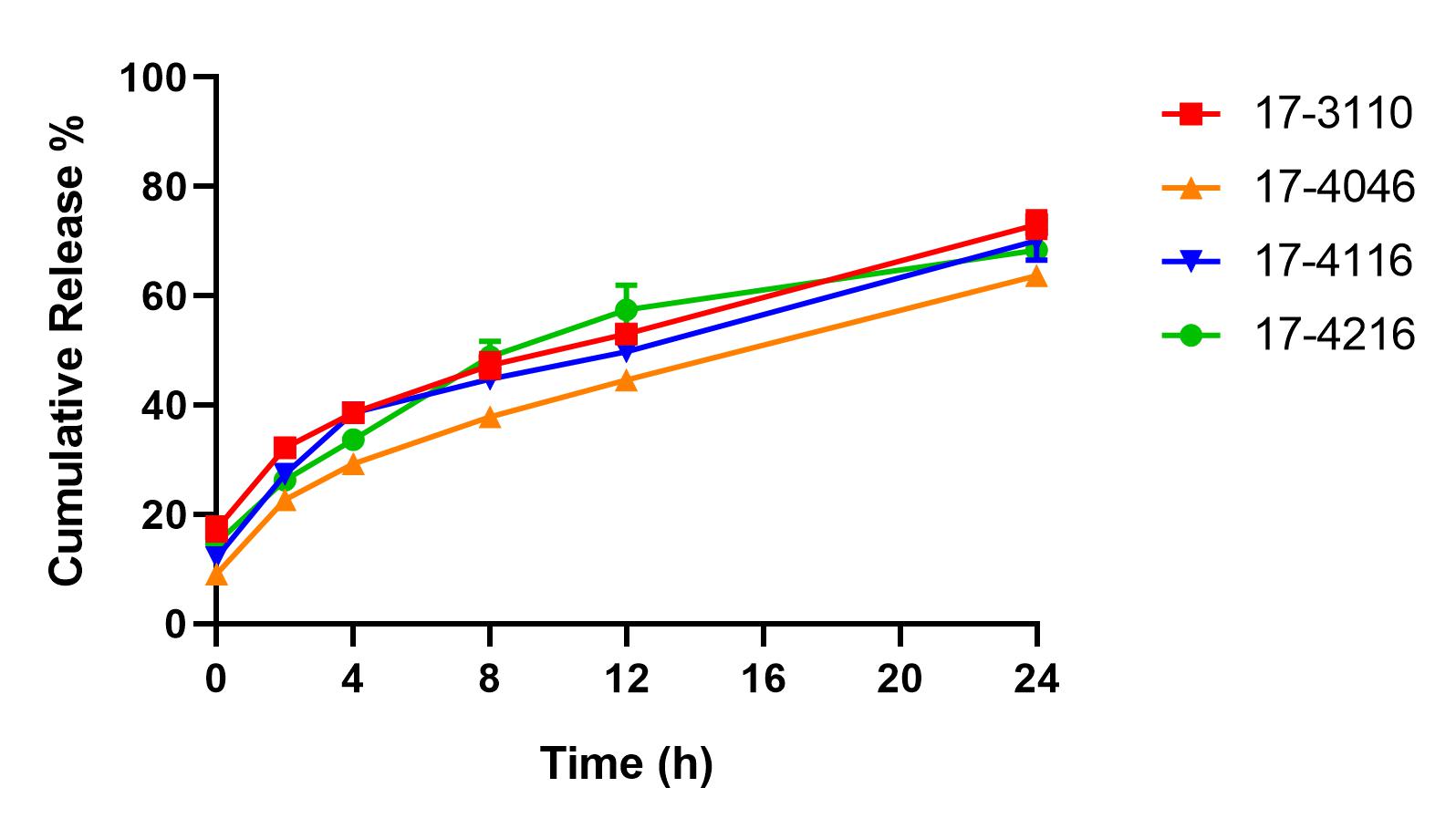 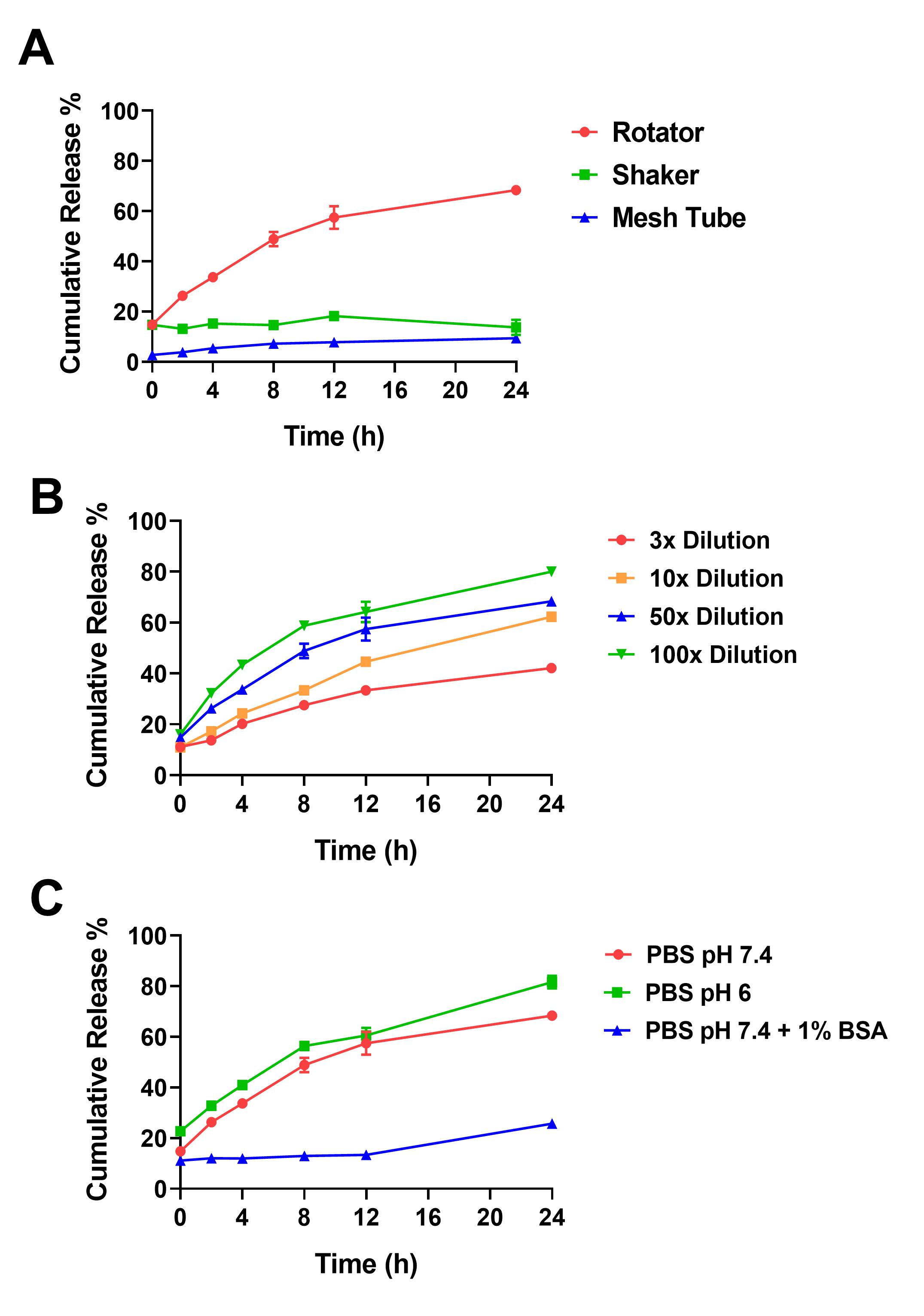