Purpose: This research focused on lumefantrine (lum), an anti-malarial drug which is characterized by low crystalline aqueous solubility (< 80 ng/mL) and high permeability. The marketed formulation relies on co-administration of fat-rich food for its solubilization which has resulted in its low oral bioavailability of 4-11%. The goals of this study were two-fold: first, improving dissolution of lum by formulating it as an amorphous solid dispersion (ASD), and second, developing a simple, low-cost, manufacturing method like anti-solvent precipitation to produce this ASD. The manufacturing method needs to be cost-effective to have a wide application in impoverished countries that use this drug extensively for the treatment of malaria. To address the stated goals, the study had the following objectives: 1) to create lum ASDs with commonly-used polymers by anti-solvent precipitation method; 2) to characterize these ASDs for their physicochemical properties, drug release profiles, and solid-state stability; 3) to determine optimal polymer/s and drug loading/s for manufacturing lum ASDs using this method.


Methods: The study investigated Lum ASDs prepared with a fixed drug: polymer ratio (4:6) from four acidic polymers: hydroxypropylmethylcellulose phthalate (HPMCP), hydroxypropylmethylcellulose acetate succinate (HPMCAS), cellulose acetate phthalate (CAP), and Eudragit L100 (EL100). The ASDs were manufactured by anti-solvent precipitation method, wherein an organic solution of the drug and polymer was sprayed by an ultrasonic nozzle into its anti-solvent, water. The ASD precipitate was filtered and dried at room temperature under vacuum. The physical stability of the ASDs was studied under accelerated storage conditions of 75% relative humidity (RH) and 40°C. The formulations were characterized for crystallinity using powder X-ray diffraction (PXRD) and for moisture content by thermogravimetric analysis (TGA). The glass transition/melting point of the dispersions was investigated using modulated differential scanning calorimetry (DSC) while their morphology was determined using scanning electron microscopy (SEM). The particle size distribution of powder samples was determined using Malvern Mastersizer 3000, a laser diffraction-based instrument. Dissolution study was performed in phosphate buffer (pH 6.8) at 37°C. Drug release profile of the prepared ASDs was compared to that of a marketed formulation (Coartem®) in the same media. Based on the initial results, additional drug-polymer ratios (2:8 and 3:7) for HPMCP and HPMCAS polymers were similarly characterized.


Results: The PXRD spectra obtained immediately after the preparation of the ASDs indicated no crystalline peaks for HPMCP, HPMCAS, and CAP-based ASDs, thus confirming their amorphous form while the EL100 ASD plot showed small peaks indicating onset of crystallization. The stability study (Table 1) indicated HPMCP and HPMCAS to be the most suitable polymers with lum amorphous form being retained for over two months. The higher water content of CAP dispersions after drying (10% w/w as opposed to an average of 4% w/w in other ASDs) and longer drying times of EL100 dispersions (4 days vs < 12 hours for other ASDs) could be a possible reason for the rapid development of crystallinity in these formulations. The glass transition temperature of ASDs was in general agreement with the PXRD results in terms of identifying the stable dispersions, viz. all HPMCP based ASDs with highest Tg values (89-110°C), followed by (85-87°C) and CAP (82°C) dispersions. SEM images showed irregular particle shape and a tendency of the particles to aggregate upon drying. The particle size of dried ASDs was between 150-1350 µm. The amount of drug released from HPMCP and HPMCAS ASDs exceeded the drug amorphous solubility at all drug loadings (Figure 1). At 2:8 drug-polymer ratio, HPMCP showed maximum drug release of 208.41 µg/ml, followed by HPMCAS which reached 142.84 µg/ml. In contrast, no drug release was detected for the marketed drug formulation even at 2 hours.


Conclusion: Amorphous solid dispersions of lumefantrine were succesfully prepared by affordable manufacturing method of anti-solvent precipitation. The choice of polymer and drug-polymer ratio played a crucial role in solubility enhancement of lum, with HPMCP at a drug-polymer ratio of 2:8 providing the best stability and dissolution properties. Our study demonstrated, for the first time, that amorphous solid dispersions of lumefantrine prepared by simple and economic method of anti-solvent precipitaion could not only enhance the physical stability of amorphous lum through intermolecular interactions with polymers but also lead to significant enhancement of drug release from the formulation compared to marketed formulation. 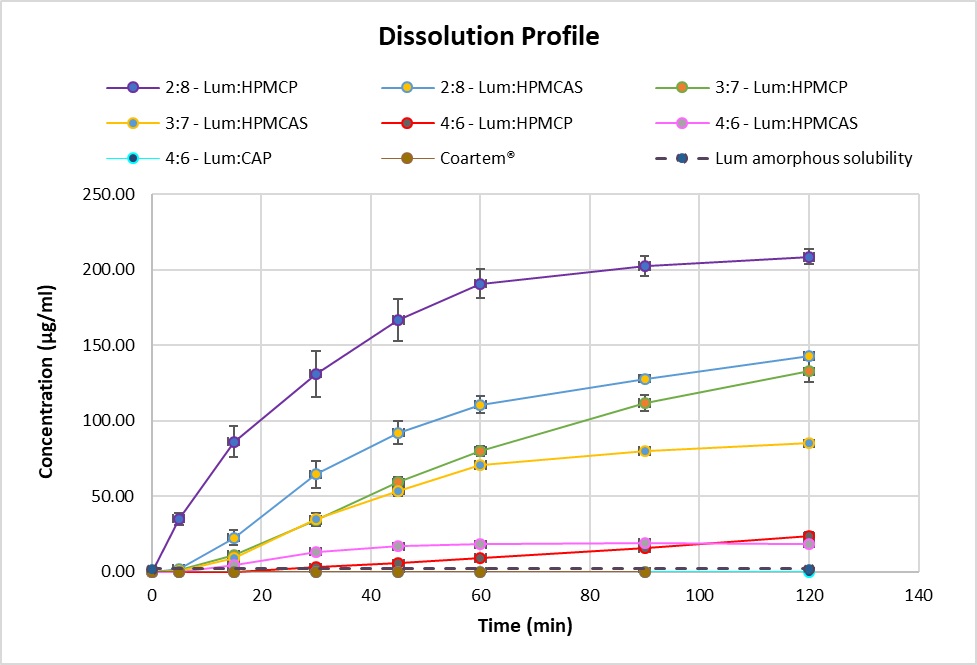