Purpose: The strategy of using amorphous solid dispersions (ASD) enables the delivery of solubility-limited drugs by improving their solubility thus bioavailability. Hot melt extrusion (HME) has been widely used as a method to prepare ASDs for such purpose. The energy generated by extruder in the form of mechanical and thermal output enables the dispersion and dissolution of crystalline drugs in polymeric carriers. However, the energy required to disrupt the stable crystalline form of drugs and to generate homogenous ASDs can also result in chemical degradation, leaving a narrow process design space. Therefore, the application of HME becomes challenging in many cases, and it is of interest to investigate methods to process drugs and polymeric carriers at milder extrusion conditions. More than one-third of pharmaceutical compounds reportedly exist as hydrates. Dehydration of such compounds can happen during extrusion (elevated temperature) and create a disordered molecular structure. A more disordered molecular structure may facilitate the preparation of ASDs during HME meaning less energy will be needed. Therefore, we hypothesize that using drug hydrates in extrusion may help expand the HME processing window.


Methods: In this study, carbamazepine (CBZ) was chosen as the model drug (dehydrate and anhydrate). Soluplus® was selected as the matrix excipient based on its relatively low glass transition temperature (72 °C) and miscibility with CBZ. In order to extrude the drug and polymer blends at a low temperature, Vitamin E succinate (TPGS) was added. CBZ dihydrate was prepared by suspending CBZ anhydrate in water for 24 hours. The suspension was filtered by vacuum filtration, and the resulting slurry was lyophilized at 0 °C and 2500 mTorr for 18 hours. Differential scanning calorimetry (DSC), powder X-ray diffraction (PXRD), and polarized light microscopy (PLM) were used to verify the successful formation of the carbamazepine dihydrate and to quantitate the crystallinity in the resulting extrudates. Formulations with CBZ dihydrate were processed using a Leistritz Micro-18 extruder with a side feeding barrel configuration, different drug loadings, and various barrel temperatures. Also, formulations with CBZ anhydrate were processed at the same extrusion conditions to investigate the influence of CBZ dihydrate on the preparation of CBZ ASDs.


Results: Dehydration/crystal disorder of CBZ dihydrate occurred at 40 to 70 °C followed by recrystallization of the disordered CBZ molecules at 86 °C. At different temperatures (e.g., 35, 40, 44, 50, 60, and 80 °C), CBZ dihydrate converted into different polymorphs depending on the duration time. It was found that at 35 °C for 60 mins or 40 °C for 30 mins, CBZ dihydrate converted into a disordered state with the minimum presence of recrystallized beta polymorph. In order to utilize this higher energy disorder state and to minimize the occurrence of recrystallization (only enabling the dehydration of CBZ dihydrate), polymer blends should melt before the side feeding of the drug. Therefore, extrusion temperatures were set from side feeding barrel configuration was used in this study. By using CBZ dihydrate, CBZ Soluplus®-TPGS ASDs (10% w/w drug loading) were successfully obtained at all three temperatures, 60, 120, and 140 °C confirmed by PLM and DSC, while the ASDs of using CBZ anhydrate were only obtained above. However, at 25% w/w drug loading, CBZ Soluplus®-TPGS ASDs cannot be achieved at those three temperatures either by using CBZ dihydrate or CBZ anhydrate.


Conclusion: Compared to CBZ anhydrate, the required extrusion temperature to achieve CBZ Soluplus®-TPGS ASDs (10% w/w drug loading) was successfully lowered from 120 °C to 60 °C with the help of CBZ dihydrate. This work demonstrated that proper utilization of higher drug energy states caused by form change during the extrusion process can significantly expand the HME design space. 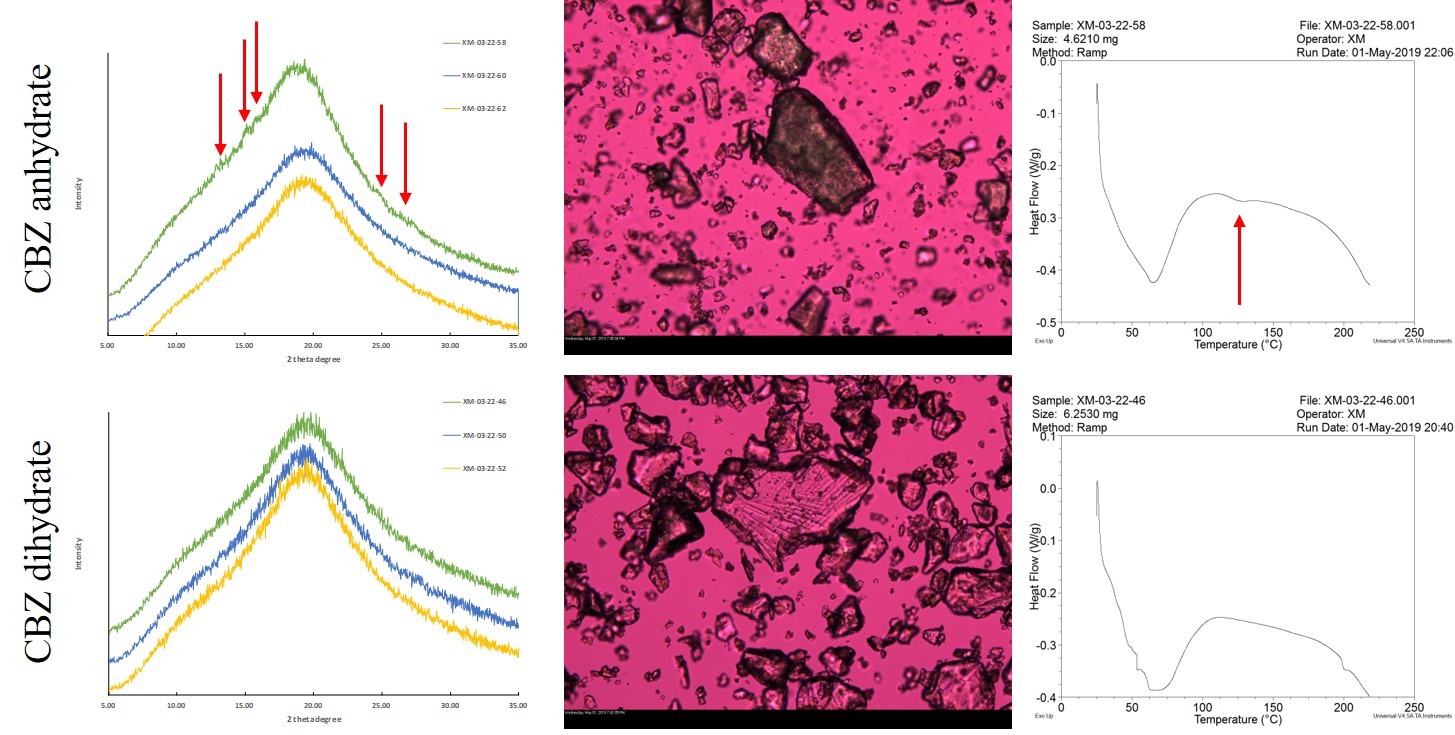