Purpose: Pancreatic cancer (PC) is the third leading cause of cancer-related mortality in the United States and is likely to be the second leading cause by 2020. It has the lowest 5-year survival rate, for all stages combined, in any cancer (8%) and this has not significantly improved over the last 40 year. Successful treatment of pancreatic ductal adenocarcinoma (PDAC), a type of PC, remains a challenge due to the late detection, development of chemo-resistance, high rate of metastasis, and the desmoplastic microenvironment obstructing the therapeutic interventions. PI3K/AKT/mTOR axis is known to be the culprit in PC and its inhibition is shown to be beneficial in the patients. Cytoskeleton components of the cells are attractive targets for the treatment for many cancers. Here we have used a novel tubulin inhibitor, CH-III-8, acting by inhibiting colchicine binding site and a dual inhibitor of PI3K/AKT/mTOR and BRD4, SF2523, to obtain the synergistic PC cell killing effect. The combination therapy using inhibitors of tubulin polymerization and PI3K/mTOR axis have not been reported previously.


Methods: We have established the cytotoxicity of the individual compounds using the MTT assay in Panc-1 pancreatic cancer cell lines. The combination index (CI) of these two drugs was established using the CompuSyn software at constant/non-constant ratios. Based on the mechanism of action of individual drugs, CH-III-8 arrests the cell in G2/M phase while SF2523 arrests the cells at G1/S phase and we have performed the cell cycle study with three different concentrations of the drugs. We have confirmed that CH-III-8 inhibits Tubulin polymerization by binding to colchicine binding domain in the in-vitro assay. We will use block copolymer, well tested in our laboratory for the pH-sensitive delivery of the combination of these drugs.


Results: The cytotoxicity effect of CH-III-8 was established with Panc-1 cells where the IC50 was determined to be 6.0 nM. Similarly, SF2523 had the IC50 of 3.0 µM in Panc-1 cells. The non-constant combination of SF2523 and CH-III-8 showed the synergistic effect in most of the ratios. We have selected combination of 1.5 µM of SF2523 and 6 nM of CH-III-8 for further studies based on the combination effect, drug concentration and the fraction affected (0.77). In the cell cycle study, at 24 h SF2523 was able to arrest the cells in G1 stage at 1 µM, 2 µM and 3 µM concentrations, while there was no significant effect of the CH-III-8 at 1 nM, 2 nM and 4 nM concentrations. On the other hand, CH-III-8 was able to significantly arrest the cell growth at G2 stage in concentration dependent manner after treatment for 48 h while the effect of SF2523 remained the same. In tubulin polymerization assay, it is seen that CH-III-8 is an inhibitor of colchicine binding domain.


Conclusion: Taken together, the combination of tubulin and PI3K/mTOR-BRD4 inhibitors act synergistically to kill the PC cells. Our delivery system is well tested and will be able to deliver the compounds to the pancreatic tumor in orthotopic xenografts mouse models. 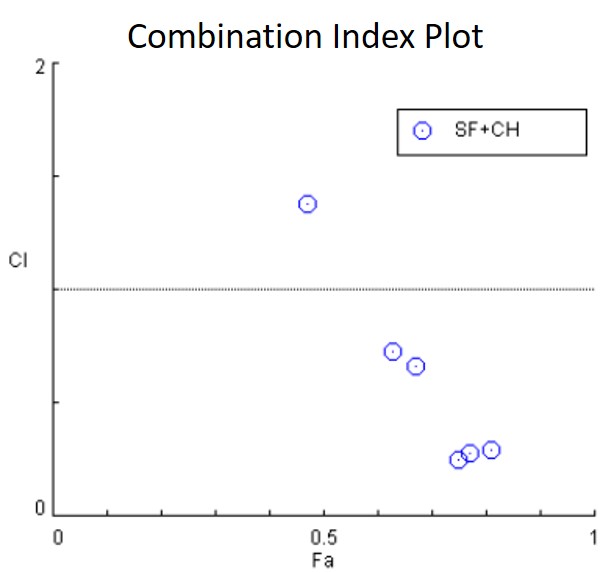 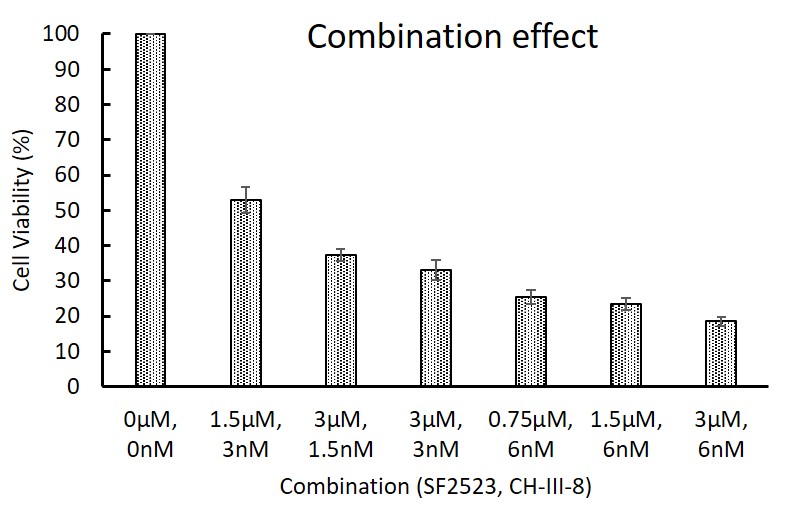