Purpose: Cystic Fibrosis is an inherited diseased involving bacterial biofilm that establish in the respiratory system. One of the mechanisms of antibiotic resistance of bacterial biofilm is lack of drug penetration, due to the existence of extracellular polymeric substance (EPS) secreted by bacteria in the biofilm. The purpose of this study is to synthesize polyester dendrimer (Generation 4 Bis-MPA hydroxyl dendrimer, TMP core) tobramycin conjugates with different surface charges, and to explore how such characteristics impact the penetration of these conjugates through the bacterial biofilms and the mucosal layer in the airways, which is also an important barrier to drug carriers.


Methods: Tobramycin (Tobra) was conjugated to amine -modified generation 4, hydroxyl-terminated polyester dendrimer (G4-NH2), via a hydrolysable ester bond. Dendrimer-tobramycin (G4-NH2-Tobra) and their PEG (1KDa)-modified analogs (G4-NH2-Tobra-PEG) were prepared, to achieve both a positively charged and neutral carriers under physiological conditions. Minimum inhibitory concentrations (MIC) of free tobramycin, G4-Tobra and fully hydrolyzed G4-Tobra against planktonic P. aeruginosa (FRD1 - mucoid strain; and PAO1 - non-mucoid strain) were assessed. Bacterial biofilm was grown in a flow chamber. Penetration of FITC-conjugated G4 and their PEGylated analogs through biofilm was measured as a function of time using confocal microscopy (ZIESS 710), and the diffusion through synthetic mucus was investigated using Fluorescence Recovery After Photobleaching (FRAP).


Results: G4-NH2-Tobra and G4-NH2-Tobra-PEG were synthesized and characterized via MALDI-TOF and 1H-NMR. Fully hydrolyzed G4-NH2-Tobra has a comparable MIC (1µg/mL for both PAO1 and FRD1) to free Tobra (1 µg/mL for PAO1 and 0.5 µg/mL for FRD1), indicating that the biological activity of Tobra is maintained through the conjugation and release processes. Mature PAO1 biofilm was formed after three days growing in the flow chamber. The neutral dendrimer conjugate (G4-NH2-FITC-PEG) showed extensive and rapid penetration through PAO1 biofilm, relative to positively charge dendrimer conjugate (G4-NH2-FITC). Similarly, the diffusion coefficient of G4-NH2-FITC-PEG (5.3 ± 0.4 µm2/s) was significantly higher than that of G4-NH2-FITC (3.6 ± 0.5 µm2/s) in synthetic mucus.


Conclusion: Reducing surface charge of the dendrimer-Tobra conjugates via PEGylation promotes penetration through bacterial biofilms and improves diffusivity in synthetic mucus. The biological activity of Tobra is maintained during conjugation and subsequent release. These results suggest that dendrimer-Tobra conjugates with appropriate surface chemistry may be used to improve cell kill in bacterial biofilms. 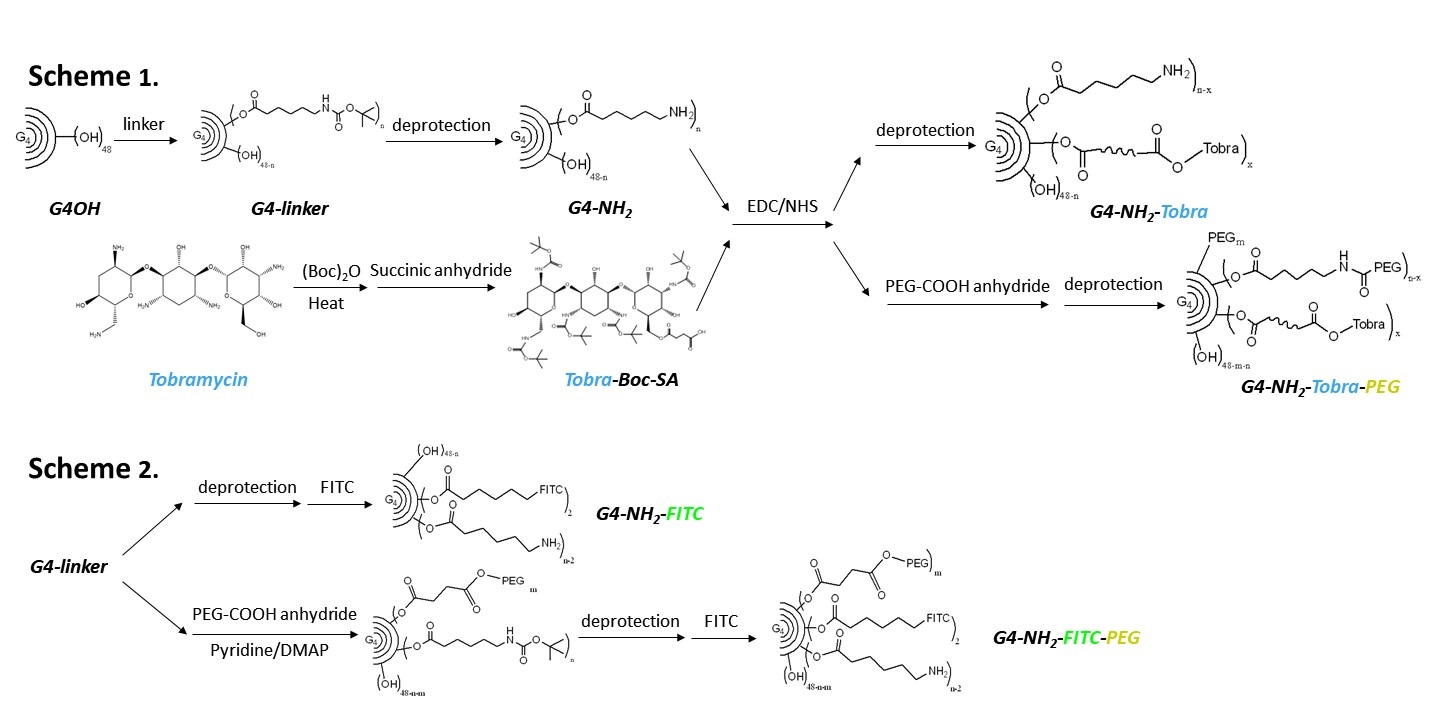 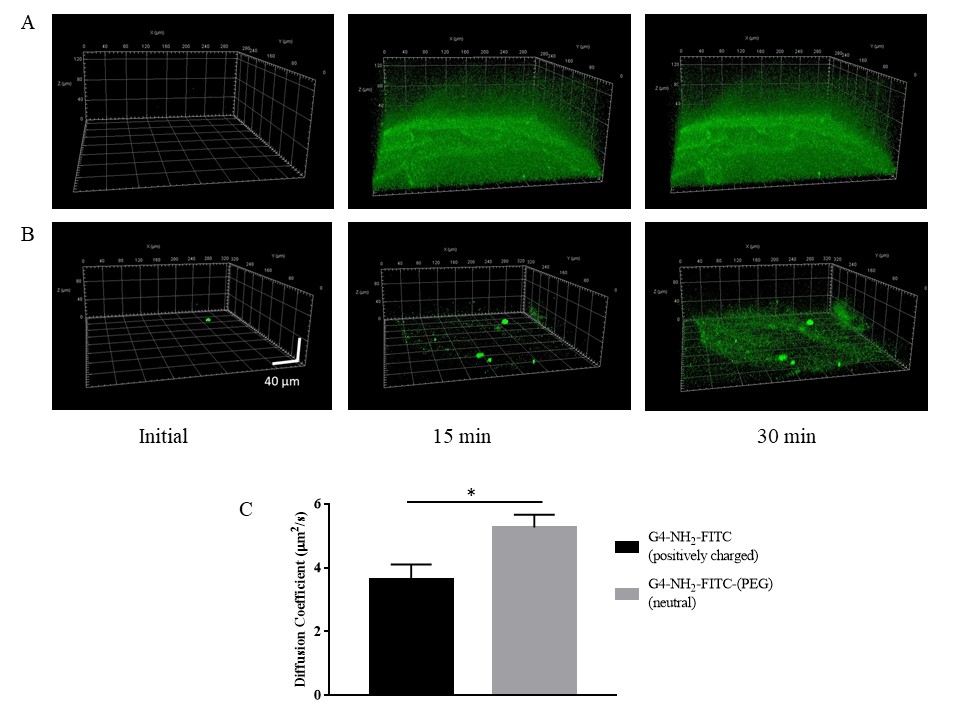