M0930-02-11 - PLGA Based Drug Delivery and Importance of In Vitro Release Determination and Experimental Insights: Development of a Novel “Basket-in-Tube” Method

Purpose: The requirement to avoid removing drug implants from site of implantation in the body, achieve enhanced therapeutic effect, deliver a diverse range of small molecules and biologics including peptides, proteins, and improve patient compliance, has accelerated the development of biodegradable long-acting injectables (LAI). Until now, poly-lactic-co-glycolic-acid (PLGA) has been extensively used in the design of LAIs due to its biocompatibility, biodegradability, and polymer flexibility for release rate modulation via control of system construction, bulk or surface erosion, and formulation optimization. However, in-vitro drug release determination from these systems including different device morphologies and geometry (i.e. micro and nanospheres, different in-situ formations or constructs, etc.) are challenging. Thus far there is no compendial in vitro drug release method(s) to study dissolution from these systems including controlled release LAI. Various non-standard methods are widely used (i.e., sample separation via centrifugation; dialysis; and USP 4 flow-through cell methods) where hydrodynamics, the potential for aggregations, absence of biorelevace of the in-vitro conditions, and lack of standardization make quality control and product comparisons difficult and consequently create regulatory issues. The purpose of this study is to develop and validate the in vitro release method(s) from an in-situ PLGA gel forming LAI, simulating the subcutaneous condition. In addition, the mechanism of drug release from the delivery system is investigated.


Methods: The LAI was prepared by mixing naltrexone with PLGA solution (40% PLGA 5050 in N-Methyl-2-pyrrolidone w/w). 30mg naltrexone via syringe coupling was mixed with the prefilled syringe with 0.5 mL polymer solution. The mixture was introduced via injection into a buffer media where it immediately transformed into a solid gel of different geometry. To obtain and predictably produce standard shape a die cavity filled with buffer media and a light weight matching plunger was used to shape the matrix upon drug-PLGA injection as shown in Figure 1d. The in vitro release result is compared to the group without shape control as shown in Figure 1a-b. Three different in vitro release set up is used in this study as shown in Figure 2. Mathematical modeling of drug release is done to determine the drug release mechanism from the in-situ gel forming system.


Results: In-situ gel forming PLGA can be fabricated into various shapes as indicated in Fig.1. When Drug-PLGA solution is injected by a needle formation of a solid helix is observed. The helix shape varies significantly and strongly depends on the injection rate and associated resistance to injection process due to the rapid formation of solids in the needle tip. Another issue relates to the helix structure and its break up into the thin and fragile strands during the dissolution period. When the Drug-PLGA system is injected into the media without a needle, around semi-spherical solid is formed as illustrated in Fig.1b. In both methods, entrapment of air bubbles and variations in surface-volume ratios in the gel and fragments was evident all of which will impact drug release rate. To overcome irregular shape formation specific tooling was adapted as described in Fig.1d. Upon Drug-PLGA system injection into the cavity, a disk-like matrix with predictable surface-volume ratio was produced. The weight of the plunger used to fabricate the disk corresponded to the force required to extrude the solution out through the needle-syringe system (needle 21 G). Based on the error bars variability between the release profiles from disk matrix are insignificant (Fig.2f).

Dialysis Membrane and Basket in Tube (adapted in our laboratory) methods show a comparable trend with three distinct phases (i.e., burst release, diffusion phase, and plateau phase), while data reproducibility was superior in the case of Basket in Tube relative to both dialysis and separation methods. Variabilities in the case of separation method relate to the disruption of the matrix diffusion layer when the entire buffer replacement is performed. Dialysis Membrane method showed faster and variable release rates relative to Basket in Tube, which can be due to the hydrodynamics and limiting effect of membrane on drug diffusion and transport. In-vitro dissolution data with different drug loading (see Fig.3), obtained with the developed disk-matrix and Basket in Tube method appear to provide reliable and reproducible release rates from the Drug-PLGA system based on in-situ gel formation. The method is designed with the idea to mimic the tangential movement and low hold-up volume mimicking physiological conditions.

Using various kinetic equations it appears that the best kinetic model describing diffusional and erosional aspects is that of Peppas-Sahlin with the highest correlation coefficient.


Conclusion: In this study, a new approach describing shape control during in situ gel formation is illustrated. The innovative and novel Basket in Tube method shows a reliable and reproducible release data when compared to the other conventional in vitro release methods described in the literatures. The described methodology may facilitate formulation development, release comparisons and product performance among different manufactures or when investigating IVIVC. 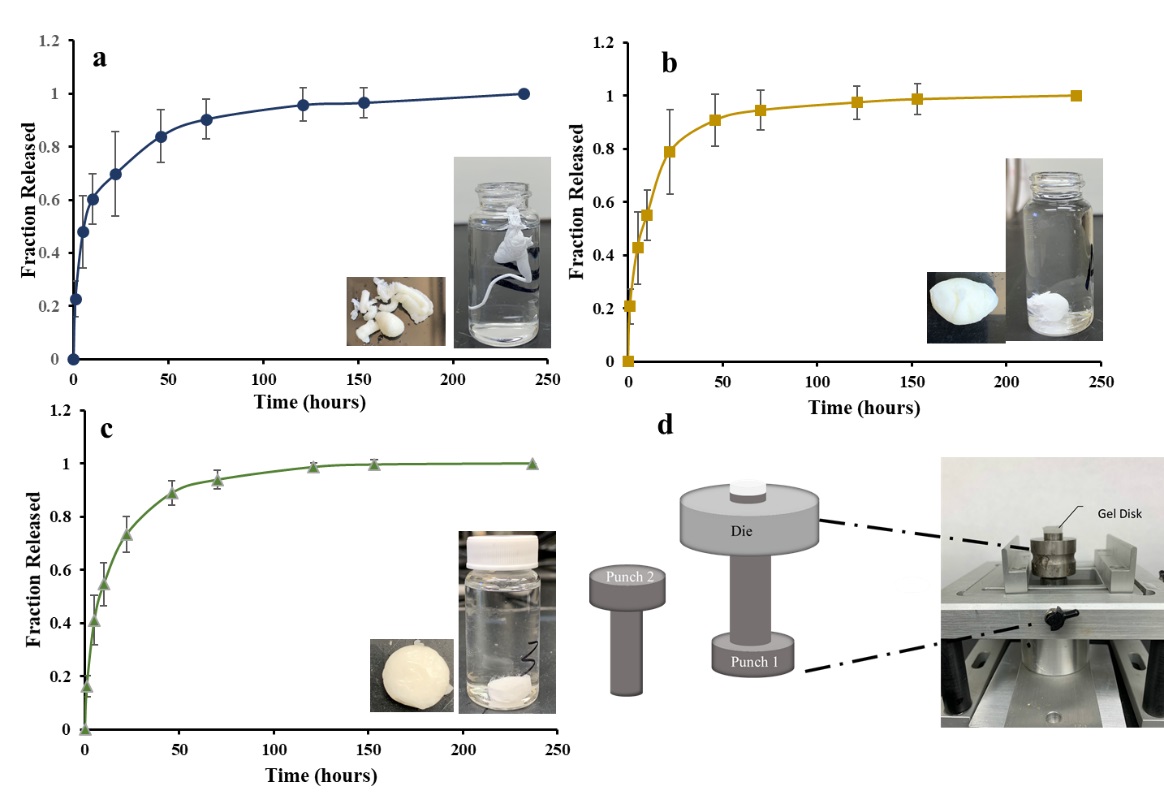 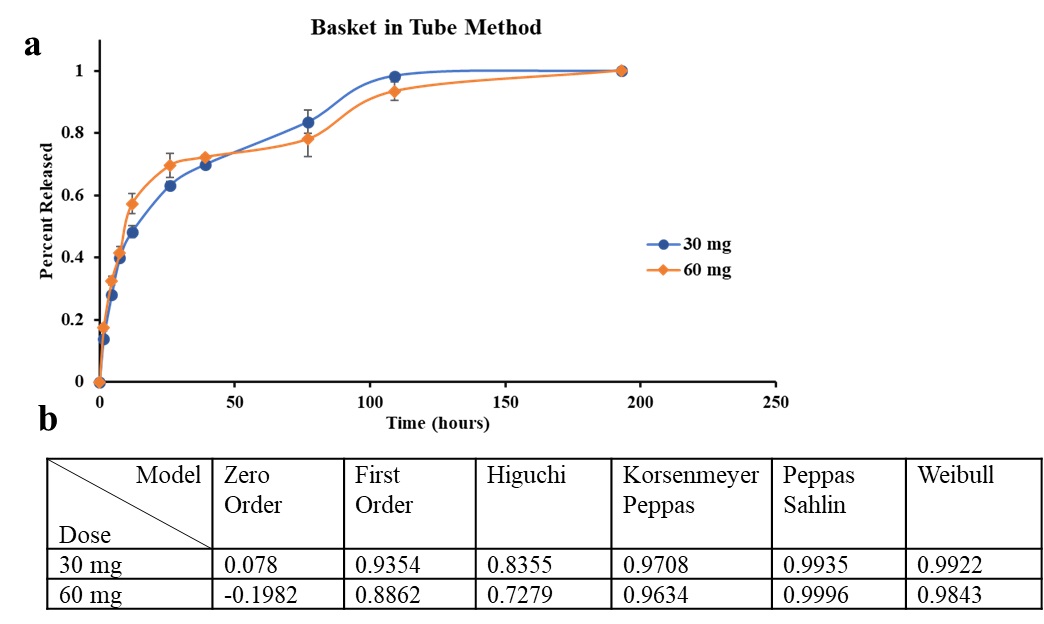