W0930-04-24 - Dissolution of Indomethacin Crystals into a Polymer Melt: Role of Diffusion and Fragmentation

Purpose: The dissolution or melting of a crystalline drug into a molten polymeric matrix underpins the fabrication of a number of drug delivery systems. However, little is known about how crystals dissolve in such viscous matrices. Herein, the heat-induced dissolution of indomethacin crystals into a molten polymer was evaluated, probing changes in crystal features at multiple length scales using various microscopy techniques. The goal of this study was to explore the dissolution of drug crystals into molten polymer under quiescent conditions, to better understand the crystal-to-solution transformation in the absence of mechanical input, addressing the hypothesis that crystal fragmentation occurs in addition to diffusion-based crystal shrinkage.


Methods: Copovidone films with suspended indomethacin crystals (5:1 ratio) were heated under quiescent isothermal conditions (130°C), at a temperature below the drug’s melting point, to initiate the crystal dissolution process and observed with time. By monitoring changes under multiple length scales, effects of crystal properties and microstructure on the dissolution mechanism were captured.


Results: The dissolution of three individual crystals under polarized light under quiescent isothermal conditions (130°C) is shown in Figure 1. Over the monitoring period (2 hours), each crystal demonstrates irregular dissolution patterns, such as channel and hole formation and subsequent fragmentation, in addition to diffusion-based particle shrinkage. Bright field TEM images capture the stages of channel formation and fragmentation in the crystalline particles shown in Figure 2. Each of these particles has a rounded shape, indicating fairly uniform dissolution and reduction in crystal size by dissolution at all crystal surfaces. Figure 2a shows an example of the initiation of channel formation, where the channel has advanced < 20 nm into the crystal. A more extensive channel, where the particle is fully divided, can be seen in Figure 2b. At an even more advanced stage of dissolution, separate fragments, presumably originating from a single particle with extensive channel formation, can be observed (Figure 2c).

In Figure 2d-f, the mechanism of fragmentation of a 30 nm crystallite is observed. The FFT pattern shows four distinct spots with equivalent lattice spacing, which were individually reconstructed and false colorized with red, blue, yellow, and green. The overlay of these fragments reveals the layer-like structure of the crystal. Due to the size and spatial placement of each of the four fragments, there are three fragmentation sites where the crystal has delaminated or split apart. Rotation of each fragment presumably occurs as a result of slow dynamic motion of the crystallites in the amorphous matrix, diffusive movement of indomethacin into the amorphous matrix, and diffusive movement of copovidone into the area of the crystal, which functions to push the fragments apart. The crystal fragments, from red to green, rotate over a total of 18.8°.

Diffusion-based dissolution, schematically depicted in Figure 3a, represents the prevailing model for formation of a homogenous drug-polymer melt at temperatures above the polymer’s glass transition. However, our imaging studies additionally confirm a fragmentation process, depicted in Figure 3b. We propose that higher energy sites are composed of defects intrinsic to the crystal, or representative of the typical surface energy heterogeneity associated with crystal surfaces, which drive faster dissolution rates, channel formation, and fragmentation.


Conclusion: Defect sites intrinsic to the bulk crystals were hypothesized to be the origin of the dissolution-induced fragmentation process. A defect site-driven dissolution and fragmentation model was thus proposed. This study has implications for modeling and understanding of dissolution kinetics and pathways of organic crystals in the context of processing operations such as hot melt extrusion. 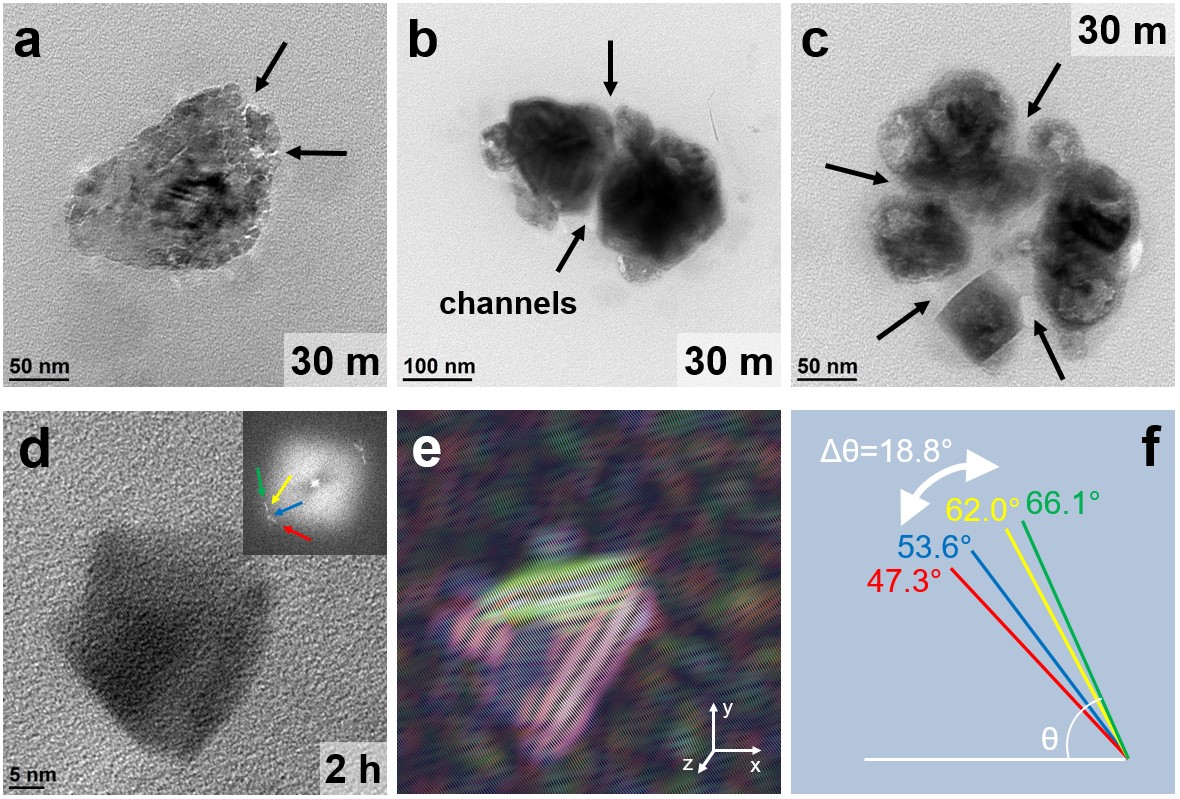 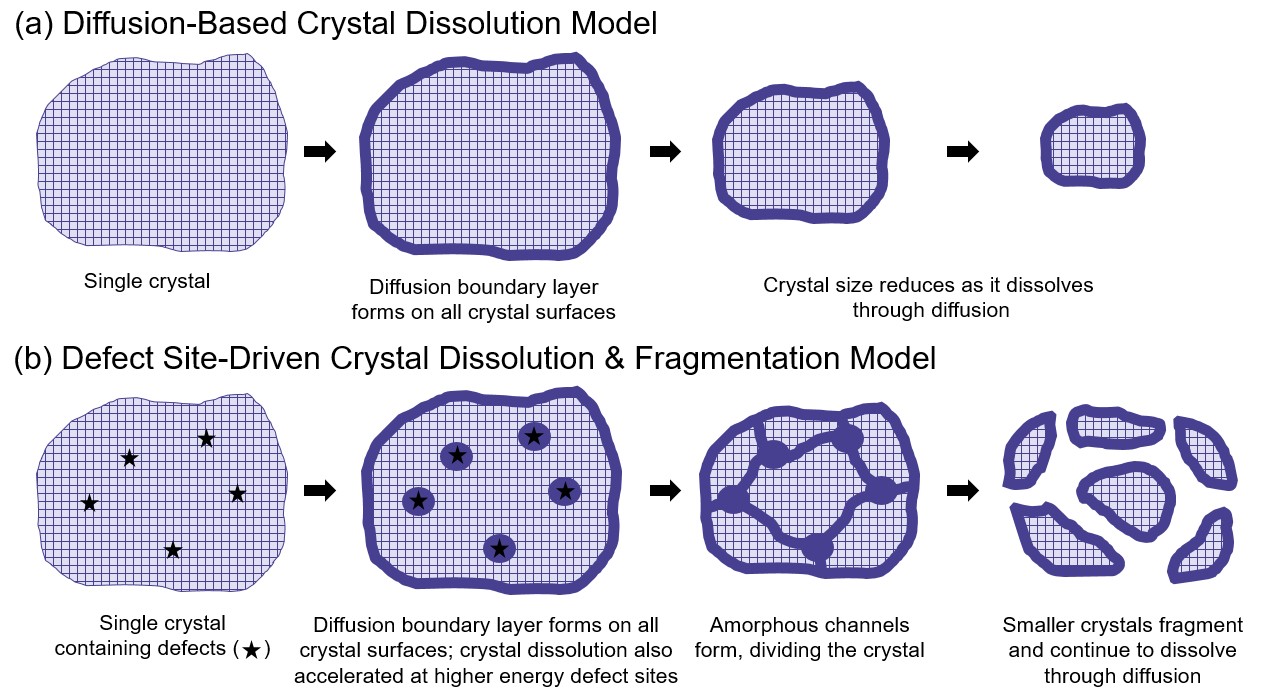