M0930-06-38 - Quality Considerations of the 3D Printed Oral Pharmaceutical Products I: The Effect of Tablet Designs

Purpose: Additive manufacturing (AM), also known as 3D printing technology, is increasingly being an optimal for personalize medication by the computer-assisted design. The 3D printing procedure is the layer-by-layer production of 3D objects from digital designs, which allows the engineering of drug-release profiles by controlling the spatial distribution within a given polymer composition rather than creating a new carrier material. Even though the FDA approved the first 3D printed products in 2015, but there is no specific guideline for industrial for the 3D printed pharmaceutical products. What was worse, the researchers prefer the novel materials or dosages form development rather than the quality consideration of the printed products. There have no reports specifically study neither the quality issues of the 3D print process nor the printed products. So, there is an urgent requirement for researcher to considering about the quality issues of the 3D print objectives to lead to formulation development. The main objective of this work is to conduct the risks assessments studies for the 3D printing process and identifying the critical quality attributes (CQAs) and critical process parameters (CPPs). Develop the control strategy for the process (figure 1). This project will mainly be focused on the affection of specific structure designs. The other factors such as materials were discussed in the previous published papers; the process, instrumentation and operation will be discussed in separate works.


Methods: Uniformed drug (acetaminophen) loaded filaments (HPMC-based) were prepared by ThermalFisher Process 11 co-rotating twin screw extruder with 2 mm round shaped die. A customized Prusa i3 3D printer was used for the 3D printing process. The tablets were designed with different i) shapes, ii) sizes, ii) fill patterns, iv) layer thickness, v) fill density, and vi) shell thickness were studied (figure 2). The tablets evaluation procedure for 3D printed tablets were following the USP 32 -NF 27 chapters. Based on the quality control guidelines from USP, the weight variation, friability, dimension, hardness, disintegration, content uniformity, and the dissolution test were conducted. Due to the layer-by-layer structure of the 3D printed objects, the vertical adhesiveness will also be evaluated.


Conclusion: This work demonstrated that the 3D printing may be an optimal solution for personalized drug products development, because drug in vitro and in vivo performance can be manipulated by adjust the size, shape, inner fill or shell designs, rather than develop novel drug delivery systems. More important, this work also stressed the affection of the different designs’ affection on the tablet quality, which can be preliminary guidelines for the quality assurance and control of 3D printed drug product development. In addition, this work also illustrated the 3D structures affection on the drug release and can lead to the optimization for the future 3D printed drug formulation development.

This work is partially supported by Grant #P20GM104932 from the National Institute of General Medical Sciences, a component of NIH. 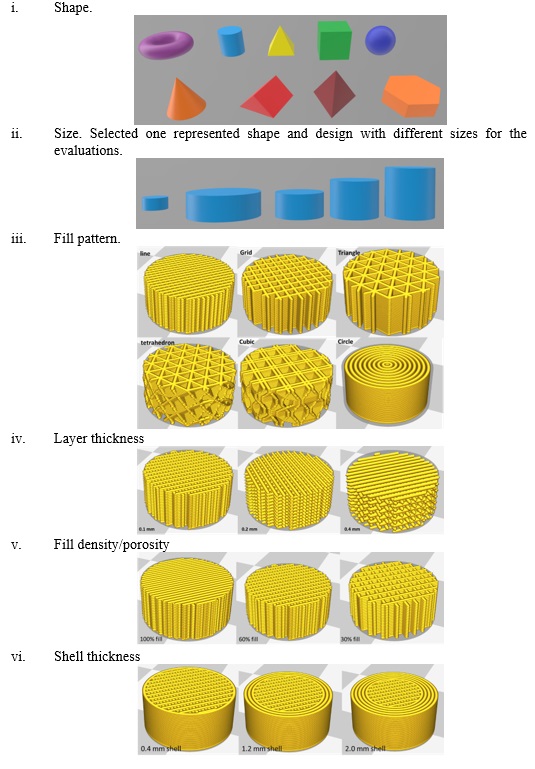