Purpose: Fixed-dose combination (FDC) medicines containing two or more active pharmaceutical ingredients (APIs) administered in a single dosage have been reported to improve patient adherence to a greater extent than do single dosages of individual components (ICs). Orally disintegrating tablets (ODTs) are easier to swallow than are conventional tablets. Thus, ODTs containing two or more APIs (fixed-dose combination orally disintegrating tablet, FDC-ODTs) possess the advantages of both FDCs and ODTs and have the potential to further improve patient adherence.

Mitiglinide and voglibose are used for oral antidiabetic therapy. Both are taken immediately before meals for the treatment of postprandial hyperglycemia. Mitiglinide/voglibose FDC-ODT is expected to improve patient adherence for medicines that are administered just before meal, since the FDC-ODT may reduce issues associated with medication, such as the need for water, taking multiple tablets, and difficulty in swallowing.

In trial 2, we evaluated the bitterness, sweetness, and overall palatability of ODTs containing APIs during disintegration and after spitting out, using a VAS. Bitterness, sweetness, and overall palatability VAS scores of 100 indicated “very bitter,” “very sweet,” and “good,” respectively. The subjects also evaluated preferability using a five-point VRS: 1 = very non-preferable, 2 = non-preferable, 3 = neither, 4 = preferable, 5 = very preferable. This trial consisted of an IC-ODTs phase including a GF-ODT and BS-ODT and an FDC-ODT phase including a GB-ODT.


Results: In trial 1, the VAS score for ease of taking tablets in the FDC-ODT phase was significantly lower (62.5%) than that in the IC-ODTs phase (7.8 vs. 20.8; p=0.010, figure 1). The mean score significantly increased from 3.3 to 3.8 (IC-ODTs phase and FDC-ODT phase, respectively) in the four-point VRS evaluation of ease of intake (p=0.028, figure 2). The amount of water required for taking the tablets in the IC-ODTs phase and FDC-ODT phase was 22.5 mL and 17.0 mL, respectively (figure 3). The amount of water for taking an FDC-ODT was decreased by 24.4% relative to that required for taking two IC-ODTs. Thus, FDC-ODT intake is easier and requires lesser water than does IC-ODTs intake. It is likely that FDC-ODT with the advantages of both FDC and ODT could lead to further improvement of patient adherence.


Conclusion: The results suggest that the mitiglinide/voglibose FDC-ODT improved palatability and reduced the amount of water required for taking tablets to a greater extent when compared with the two IC-ODTs (a mitiglinide ODT and a voglibose ODT). Many patients with diabetes mellitus take two or more medicines daily; in these cases, switching from IC to FDC and from conventional tablets to ODTs will be helpful in terms of improving palatability and reducing the amount of water required. Mitiglinide/voglibose FDC-ODT can contribute to enhancing the adherence of patients with diabetes mellitus. 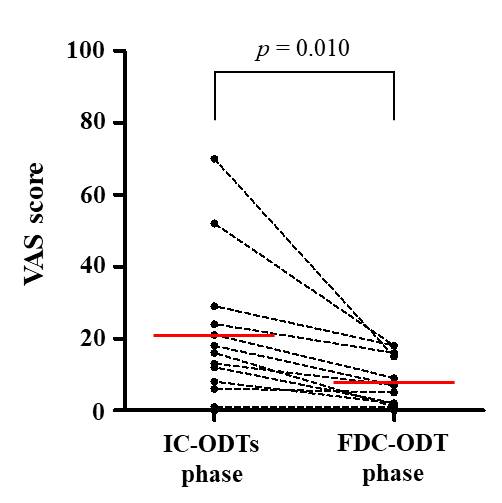 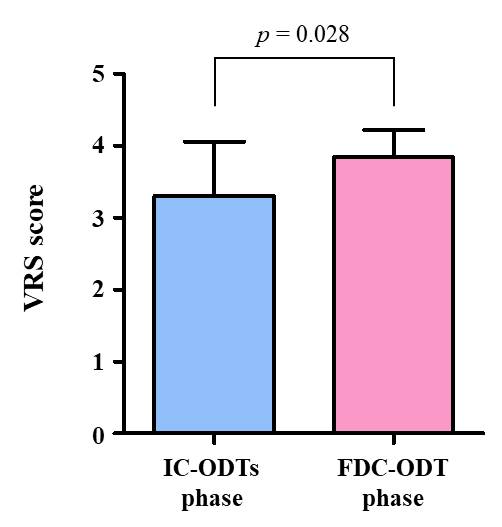 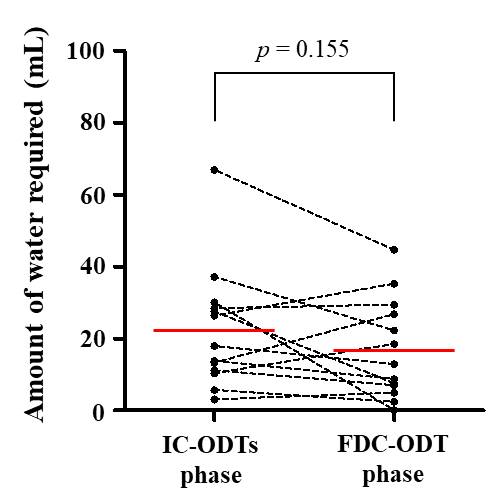