Purpose: Increasingly, hydrophilic polyvinyl alcohols (PVAs) are used as swellable and erodible matrices in the formulation of sustained release (SR) tablets. To simplify and speed up the formulation and production of such demanding formulations, directly compressible PVA grades are often preferred. However, in special cases, granulation steps are unavoidable – mainly to improve the particle characteristics of troublesome API powders. Wet and dry granulation processes are the most commonly used technologies; advantages of dry granulation include higher throughput and less moisture exposure and thermal stress on sensitive APIs. The aim of this study was to investigate the workability of a PVA-based SR matrix formulation in dry granulation and to compare the compression and API release properties to those of tablets produced by direct compression (DC).


Methods: For the PVA, we used a fine-grained (Dv50 77µm) multi-compendial PVA 40-88 specially designed to act as an API release modifier in SR matrix tablets produced mainly by DC. To determine its compaction performance, this special PVA grade was pre-blended (1:1) with microcrystalline cellulose MCC (Dv50 135µm) and mixed with poorly compressible powdered ascorbic acid (Dv50 217µm) as the model API, then sieved over 800µm and dry-granulated without further additives on an RCC 100x20 roller compactor at four different compaction pressures (30, 50, 75 and 100bar). The compacted material was passed through a 1.25mm sieve using the built-in oscillating granulator, blended with highly dispersed silicon dioxide and magnesium stearate, then compressed into tablets (500mg, 11mm) on a single-punch instrumented tablet press at compression forces of 10, 20 and 30kN. Each final tablet contained 160mg ascorbic acid, 167.5mg PVA 40-88, 167.5mg MCC, 2.5mg silicon dioxide and 2.5mg magnesium stearate. The tablets were characterized using an automatic multi-parameter tester for tablets from each compression force (n=20). The in-vitro ascorbic acid release from tablets compressed at 20kN was tested using Apparatus 2 (USP) at 50rpm in 900ml of a special release medium to ensure the stability of the ascorbic acid over a 12-hour release time (detection at 244nm). Additionally, to assess the effect of the MCC on roller compactibility, tablet compressibility and API dissolution, the amount of MCC in the premix with PVA was reduced stepwise or even totally eliminated while increasing the amount of PVA to compensate. Finally, the tableting mixtures with MCC/PVA ratios of 1:1, 1:3, 1:7 and with pure PVA were compacted at 75bar, passed through a 1.25mm sieve, tableted (20kN), and their tablet hardness and API dissolution behavior compared. All data from these dry granulations was compared to data for identical tablets produced by DC.


Results: All formulations show firm ribbons, and no stickiness on the rolls is observed. Depending on the compaction pressure, an increase in bulk density from 0.56g/ml (30bar) to 0.64g/ml (100bar) and in tapped density (0.74g/ml to 0.84g/ml) is observed compared to the DC mixture (with 0.52g/ml and 0.71g/ml respectively). A loss in tablet hardness is seen for all dry-granule-based tablets compared to DC tablets. For instance, at a compression force of 20kN (PVA/MCC 1:1), hardness is between 121N (30bar) and 87N (100bar), compared to 207N for DC tablets (the ‘loss of reworkability’ effect). The presence of MCC shows no significant effects – at 75bar, the tablet hardnesses at a compression force of 20kN are 90N (PVA/MCC 1:1), 94N (3:1), 74N (7:1) and 70N (without MCC). Independent of the compaction pressures used, dry granulation slightly accelerates in-vitro ascorbic acid release – after 6 hours, 78 to 82% of the API is released, compared to 70% for DC tablets. Even after 12 hours, there is still a slight difference between dry-granule-based tablets, which show 97% cumulative API release, and DC-based tablets with 89%. The same effect is observed independently of MCC quantity at a compaction pressure of 75bar – the in-vitro API release is slightly accelerated compared to the DC-based tablets, and this is not discernibly influenced by the amount of MCC (if any) that the tablets contain.


Conclusion: Fine-grained PVA 40-88 shows excellent workability in roller compaction processes – even without the addition of highly compactable MCC or a lubricant additive. But compared to DC mixtures using PVA 40-88, the compressibility of the final tablets clearly suffers. Additionally, there is no significant change in API dissolution behavior. In particular, no depression in the dissolution curves and no elongation of the cumulative in-vitro API release due to the use of a pre-compacted API/PVA- component are detectable. On the contrary, the API release seems slightly accelerated compared to directly compressed SR matrix tablets that use PVA. 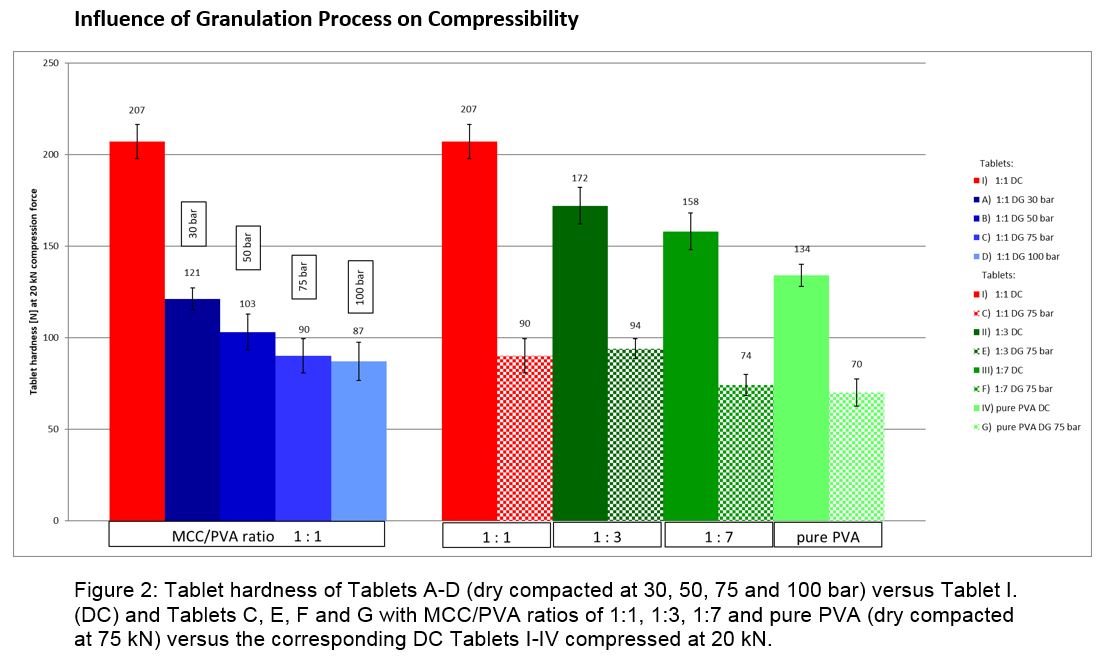