1888 - A Nationwide Outbreak of Invasive Pneumococcal Disease (IPD) Caused by a Novel Streptococcus Pneumoniae Serotype 2 (SP2) Clone in the PCV13 Era, in Israel

Background : IPD caused by Sp2 (non-PCV13 serotype) is relatively rare. However, Sp2 has a high potential for causing IPD including meningitis. Large scale outbreaks of Sp2 IPD are rare and were not reported post-PCV implementation. We describe Sp2 IPD outbreak in Israel, in the PCV13 era, caused by a novel clone. Additionally, we analyzed the population structure and evolutionary dynamics of Sp2 during 2006-2018.

Overall, 173 Sp2 IPD cases were identified; all isolates were analyzed by MLST (Figure 1). During 2016-2017, Sp2 caused 7.6% of all-IPD, a 7-fold increase compared with 2006-2015, and ranked second (after serotype 12F causing 12%) among IPD isolates.
During 2006-2015, 98% (40/41) Sp2 IPD were caused by the previously reported global ST-1504 clone. The outbreak was caused by a novel clone ST-13578, not previously reported (Figure 2). WGS analysis confirmed that ST-13578 was related, but genetically distinct from ST-1504, observed exclusively before the outbreak. A single strain of clone ST-74 previously globally reported was identified in 2017-2018.
An additional case was identified in an adult in the UK, following a family visit from Israel. The ST-13578 clone was identified only in the Jewish population and was mainly distributed in 3 of the 7 Israeli districts. All tested strains were penicillin-susceptible (MIC < 0.06 μg/mL).

To the best of our knowledge, this is the first widespread Sp2 outbreak since PCV13 introduction worldwide, caused by a novel clone ST-13578. The outbreak is still ongoing, although a declining trend was noted since 2017. 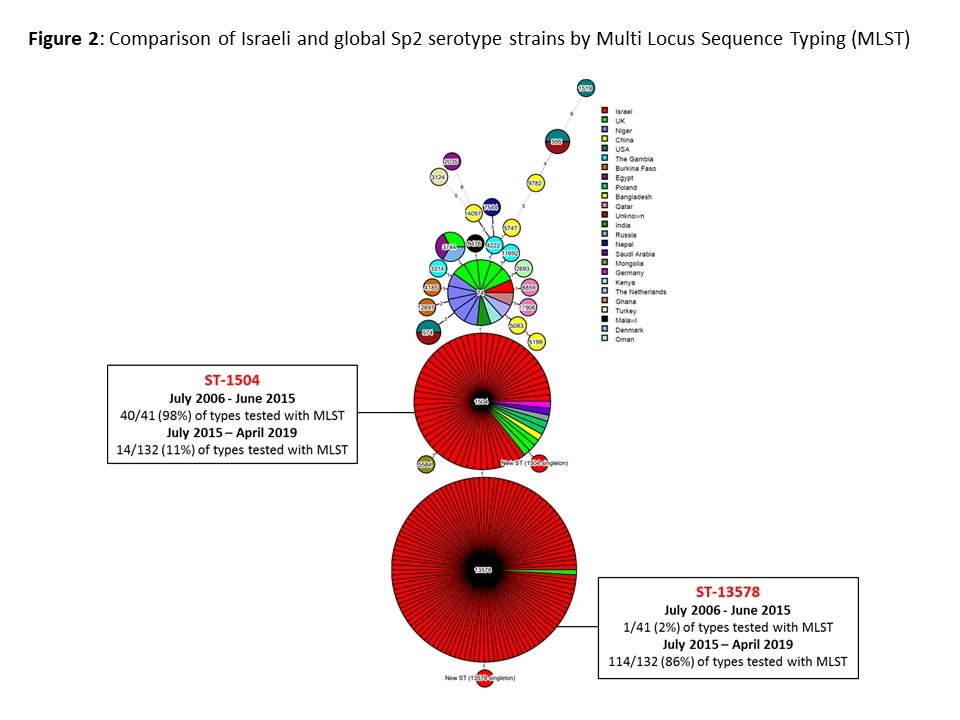