Purpose/Objective(s): Circulating cancer-associated macrophage-like cells (CAMLs) are a recently described stromal cell found in the peripheral blood of cancer patients that have been shown to be associated with disease progression. Giant CAMLS (≥50 µm) observed at baseline, before initiation of treatment, were previously reported to be predictive of disease progression in non-small cell lung cancer (NSCLC). In this prospective analysis of patients with unresectable locally advanced NSCLC, we explored the utility of CAMLs in predicting progression based on blood samples collected before, during, and at the completion of definitive chemoradiation therapy (CRT).

Materials/Methods: This 3 year prospective single blinded study assessed the role of CAMLs in determining clinical outcomes in patients undergoing definitive CRT for unresectable, locally advanced NSCLC (stage IIB n=7, stage IIIA n=22, stage IIIB n=11, and stage IIIC n=3). Patients were enrolled between December 2015 and January 2018. Median follow up after the completion of CRT was 14.9 months. CAMLs were collected by obtaining peripheral blood from patients at baseline before treatment (T0), during treatment (T1), and at the completion of treatment (T2). Blood was filtered using filtration and CAMLs quantified. CAML size ≤49 µm or ≥50 µm was quantified with the observer blinded to clinical information. Relapse free survival (RFS), progression free survival (PFS), and overall survival (OS) were analyzed at each time point.

Conclusion: Our data suggest that the presence of giant CAMLs at the completion of definitive chemoradiation for locally advanced NSCLC is predictive of disease progression and death. Continued prospective validation of CAMLs as a peripheral blood-based biomarker is needed to validate these findings. Accurate stratification of individual patients based on the presence of giant CAMLs may aid in more personalized therapeutic regimes, particularly in the era of adjuvant immunotherapy, while determining the role of CAMLs in the disease process may uncover new therapeutic modalities. 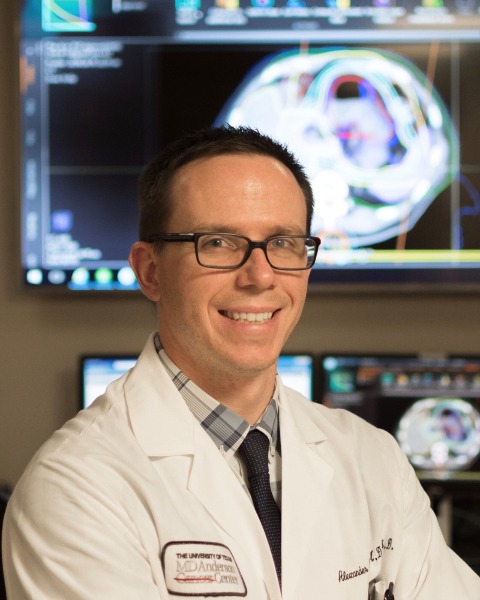 Biography:
Alexander Augustyn, MD, PhD is a PGY-4 clinical resident in the Department of Radiation Oncology at MD Anderson Cancer Center. He obtained his undergraduate degrees from the University of Chicago in 2009 and then enrolled in the Medical Scientist Training Program at UT Southwestern Medical Center. He joined the laboratory of Dr. John D. Minna where he studied lung cancer biology and genomics, and wrote a dissertation detailing a novel genetically identifiable subset of high-grade neuroendocrine non-small cell lung cancers driven by the transcription factor ASCL1. Dr. Augustyn graduated with dual MD and PhD degrees in 2016. Due to his strong passion for cancer research and clinical cancer care, Dr. Augustyn decided to pursue a career in radiation oncology. He completed his Transitional Year internship at Memorial-Sloan Kettering Cancer Center prior to beginning residency in radiation oncology at MD Anderson in 2017. His career goals are to maintain excellence in multidisciplinary cancer care while remaining productive in basic, translational, and clinical cancer research in order to improve outcomes for our patients.