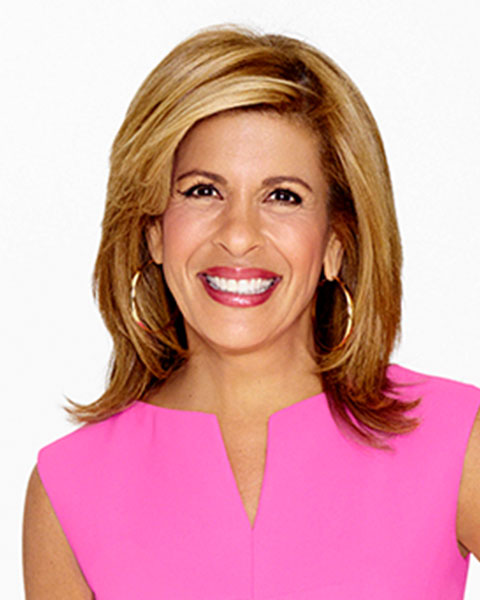 Hoda Kotb is the co-anchor of NBC News’ Today and co-host of the fourth hour of NBC News’ Today with Kathie Lee Gifford. She has served as a correspondent for Dateline NBC and covered a wide variety of domestic and international stories across all NBC News platforms, including numerous human-interest stories and features. Kotb has reported on the aftermath and one-year anniversary of Hurricane Katrina, a story personal to Kotb who lived in New Orleans for six years, the war in Iraq, the conflict in the West Bank and Gaza, and the war on terror in Afghanistan. She was also a part of the network’s extensive coverage of the 2012 Summer Olympics in London, 2016 Summer Olympics in Rio, and 2018 Winter Olympics in Pyeongchang.

A New York Times bestselling author, Kotb has written six books: You Are My Happy, I’ve Loved You Since Forever, Hoda: How I Survived War Zones, Bad Hair, Cancer and Kathie Lee; and Ten Years Later: Six People Who Faced Adversity and Transformed Their Lives and Where They Belong. Kotb is a nine-year breast cancer survivor and is involved in several initiatives to raise awareness about the disease. Her book, You Are My Happy, illustrated by Suzie Mason and available now, was inspired by the nighttime routine she shares with her daughter, Haley Joy. The book is about gratitude for the things in life—both big and small—that bring us happiness.

Prior to joining NBC News, Kotb worked as an anchor and reporter in New Orleans and in Fort Meyers, Flordia. She graduated from Virginia Tech University with a Bachelor of Arts in broadcast journalism.