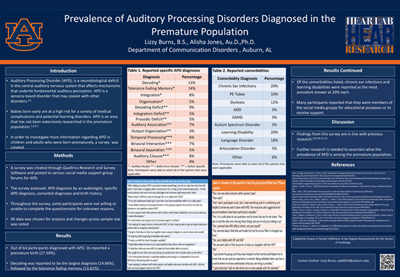 Participants should be aware of the following financial/non-financial relationships:
Elizabeth P. Burns, B.S: Nothing to disclose
Alisha L. Jones, AuD: Nothing to disclose
Sixty-six members of social media support groups for APD were surveyed to explore patterns of prematurity, diagnoses, comorbidities, and reported benefits of the support groups. A percentage of the participants were born premature and diagnosed with APD. Decoding was the most prevalent APD diagnosis reported. Learning Disorders and Otitis Media were recorded as the highest comorbidities among survey takers. With these results in mind future research should be completed in order to further explore APD patterns in prematurity.