Minimizing Ends’ Cracks of Skewed Pre-Tensioned Box Beam Concrete Girders
Precast prestressed box beam bridge is extensively used in short and medium span bridge design in the United States. Recently, skewed geometry and heavy prestressed box beam has been developed and used. Field survey of the skewed pre-tensioned box beam indicates most of the beams experience cracks within beam-ends. The range of cracks width is within the limit that required repairing beams before used on the bridge construction. Field observation also indicates the cracks are more intensive at the acute corner than the obtuse corner. The beams with cracks raise durability concern, especially when the water and chemical agent filtrate through cracks and reach strands. This research evaluates methods to minimize cracks at the box beam ends. Strands debonding, used strands in beam top flange, and the sequence of cutting strands were simulated. Case study girders surveyed during site visited were used to modeling and calibrated finite element. Three-dimensional nonlinear finite element model was established to analysis the strain distribution of the beam. The beam was modeled with actual material properties, geometry, and strand cutting sequence. The determined finite element results were compared with testing data as well as the theoretical calculation. The results from many analytical models were compared to optimize the significant of each method to reduce tensile strain. Skewed box beam cracks can be mitigated by some techniques. The first and most effective method is adding two strands at the beam top flange. Other effective methods for reducing the beam end tensile strain are debonding exterior strands than interior one. The box beam with two stands at the top flange is recommended for implementation by the skewed box beam design. 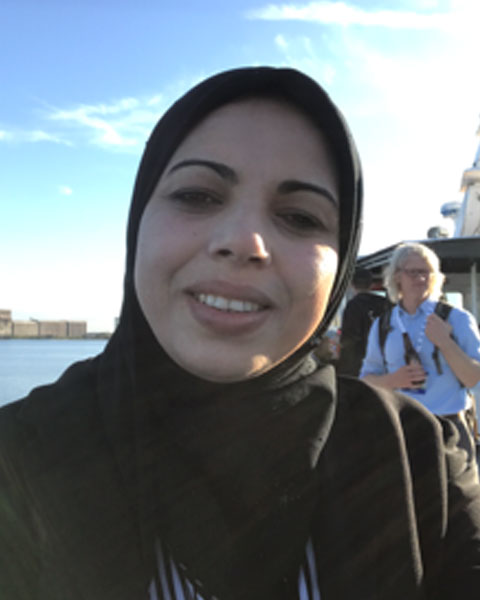 Rana Mutashar is a Ph.D. candidate at the Department of Civil Engineering at Ohio University. She is interested in improving the performances of structures, her Ph.D. research focuses on responses of skewed adjacent box beam bridges under live and environmental load conditions. She received her Master’s degree in Civil Engineering from the Basrah University, Iraq, where, she focused on the Prediction of Ultimate Capacity of Steel-Concrete Composite Beams as her graduate research topic. Prior to starting her Ph.D. program, she was a lecturer at the University of the Basrah and part of Al-burqa Consultation Company. She has also published several papers in the ASCE journal.

Shad Sargand was named Russ Professor in 1990. He has authored over 200 journal articles, conference papers and technical reports. Since its inception in 1995, he has been the lead researcher of the Ohio Strategic Highway Research Program National Test Road on US Route 23 in Delaware County, Ohio, which has contributed enormous amounts of valuable data for the Long Term Pavement Performance (LTPP) database. He also led another test road effort on US Route 30 in Wooster, Ohio. He is the Associate Director of the Ohio Research Institute at Ohio University, which operates the Asphalt Laboratory and Accelerated Pavement Load Facility in Lancaster, Ohio. Sargand has at least five nationally recognized awards and honors for his research, including most recently the William W. “Bill” Baker Award from Flexible Pavements of Ohio in March 2011 for his “commitment to quality and overall impact on the Ohio asphalt paving industry.