Ports are located in areas prone to sea level rise and storm surge. Past hurricanes have already highlighted the vulnerability of these structures exposed to extreme forces due to storm surge and waves. For example, the east pier of the port of Gulfport in Mississippi and the three major cruise piers on Cozumel island in Mexico were severely damaged from waves and storm surge created from hurricanes Katrina and Wilma, respectively. Although there is a vast research on ports subjected to earthquakes, models are still lacking to address the vulnerability of these structures subjected to extreme forces that occur in coastal storms. Thus, this study introduces an analytical framework for rapid estimation of the fragility of wharves/piers subjected to storm surge and waves. Typical deck-pile connections are selected and probabilistic analysis is conducted using Monte Carlo simulation with Latin hypercube sampling. Uncertainties in parameters affecting the structural capacity and demand of these connections are considered including material parameters, structural parameters, model error, and hazard related parameters. Fragility surfaces are derived to depict the probability of structural failure over a range of wave height and storm surge. The results show a rapid increase of the probability of failure for wave height and surge elevation close to the levels produced during hurricanes. For the structures examined, deck uplift is found to be the dominant mode of failure and of interest in the protection of existing port structures or design of new ones. The presented framework is easy to implement, computationally efficient and can be applied for different configurations of port connections and failure modes. Furthermore, this study also aims to highlight the importance of fragility surfaces for the risk assessment of ports exposed to natural hazards including effects of climate change. Illustrative case studies are shown in the Houston Ship Channel applying the fragilities with representative storms having alternative intensities and sea level conditions. 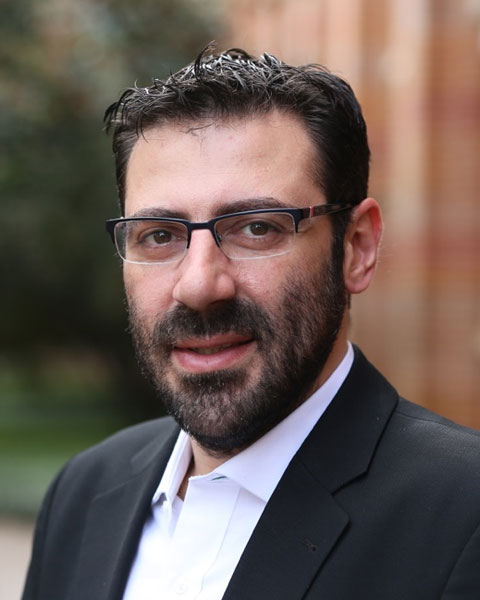 Georgios Balomenos holds a Ph.D. in Civil Engineering from the Department of Civil and Environmental Engineering, University of Waterloo (Canada). His PhD research focused on structural reliability using surrogate modeling and finite element analysis. His research interests include resiliency and risk assessment of infrastructure systems under multiple hazards, identification of risk mitigation strategies, probabilistic finite element analysis and structural reliability. Dr. Balomenos is an associate member of joint ASCE-ACI committee 445 Shear and Torsion, joint ASCE-ACI committee 447 Finite Element Analysis of RC Structures and ACI committee 348 Structural Reliability and Safety. Dr. Balomenos is currently a Shell Center for Sustainability Postdoctoral Fellow at Rice University with an appointment in the Department of Civil and Environmental Engineering. His postdoctoral research focuses on understanding and enhancing the sustainability of coastal infrastructure. His work currently addresses risk and resilience assessment of energy and transportation infrastructure subjected to hurricane hazards, with case studies in the Houston Ship Channel region. Dr. Balomenos is also collaborating with the Kinder Institute for Urban Research, to understand storm impacts on residents’ spatial accessibility to major services and to investigate the disparity of spatial accessibility change among population groups.

Jamie E. Padgett is an Associate Professor in the Department of Civil and Environmental Engineering at Rice University in Houston, TX. Padgett�s research focuses on the application of probabilistic methods for risk assessment of structural infrastructure, including the subsequent quantification of resilience and sustainability. Her work emphasizes infrastructure portfolios such as regional portfolios of bridges or oil storage tanks exposed to multiple hazards, including earthquakes, hurricanes, or aging and deterioration. She has published over 175 articles in journals or archived conference proceedings in the general area of structural response, reliability and life-cycle assessment. Dr. Padgett was the founding Chair of the ASCE technical committee on Multiple Hazard Mitigation, and is an active member of several national technical committees within ASCE and TRB. She currently serves on editorial boards for the ASCE Journal of Bridge Engineering, ASCE Journal of Structural Engineering, Sustainable and Resilient Infrastructure, and Earthquakes and Structures. Dr. Padgett has received several awards and recognitions including the 2011 National Science Foundation Faculty Early Career Development (CAREER) Award and the 2016 IALCCE Junior Award �For contributions to life-cycle analysis of structures�. She has also received recognition for her mentoring and teaching such as the 2014 Rice University Scholar Athlete Favorite Professor Award. Among other projects, Dr. Padgett currently works as a part of several large national or regional research efforts including the NIST Center of Excellence for Community Disaster Resilience (headquartered at Colorado State University), the NSF NHERI Cyberinfrastructure �DesignSafe-CI� (headquartered at University of Texas, Austin), and the Severe Storm Prediction Education and Evacuation from Disasters (SSPEED) Center (headquartered at Rice University).