Inline detectors are extensively used in chemical separations and other life sciences workflows to quantify analytes based on fundamental properties. For example, absorbance (UV-VIS) detectors measure the analyte’s light-absorbing chromophores, refractive index (RI) detectors measure molecular cross section, and electrochemical (EC) detectors and mass spectrometers (MS) measures the analyte’s charge or mass to charge ratio. Although hydrophobicity and solubility are important properties of an analyte, to date there are no inline detectors based on such properties. Here, we present the drop frequency sensor (DFS), a novel inline detector which quantifies an analyte based on its adsorption to a liquid interface.
The DFS is based on the surfactant retardation effect, a phenomenon first described by Levich in the 1960s. Levich observed that the velocity of a rising bubble is lower than expected if surfactants are present. Surfactants adsorb to the bubble’s interface, and surface flows convect them to the trailing end, where they aggregate into a stagnant cap. The cap has two effects, both of which increase drag: 1) the interface becomes immobile, and 2) the nonuniform surfactant concentration results in a surface tension gradient, which induces a Marangoni force opposing the motion of the bubble. The DFS exploits a similar effect in droplets flowing through a microchannel. Droplets of the analyte are generated by combining the sample stream with a stream of oil in a microfluidic tee junction. If the droplet contains hydrophobic molecules or other surface-active species, the molecules adsorb to the interface and are convected to the trailing end, similar to Levich’s experiments. Here, they form a stagnant cap which increases drag on the droplet train, and therefore increases channel’s hydrodynamic resistance. In a pressure-driven system, the increased resistance reduces flow rate as well as the frequency of drop generation. The droplet frequency is measured with a light scattering detector.
The DFS demonstrates excellent quantitation capability for Bovine Serum Albumin (BSA), a globular protein with known hydrophobic regions. Injection of BSA into the analyte stream temporarily reduces the drop frequency, and the frequency returns to baseline, generating a chromatographic peak. The peak area increase linearly with the quantity of injected BSA with a correlation coefficient R2=0.997. This process is highly repeatable, which is important for measurement precision. The limit of detection for BSA is 2ng, and <200pg for L-galectin, a hydrophobic protein with smaller molecular weight. The high signal-to-noise ratio suggests that even lower detection limits are possible. The low detection limits are achieved because the high surface area to volume ratio favors adsorption phenomena. 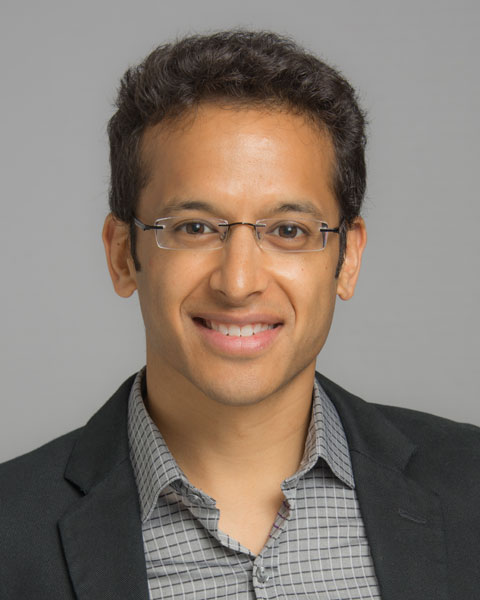 Amar Basu received a BSE and MSE in electrical engineering, an MS in biomedical engineering, and a Ph.D. in electrical engineering, all with honors from the University of Michigan Ann Arbor. His dissertation, under Prof. Yogesh Gianchandani at the NSF Center for Wireless Integrated Microsystems, investigated interfacial tension-driven microfluidics. He has been a visiting scholar at Purdue University under Prof. Graham Cooks and Intel's New Devices group, and has served as an adjunct faculty at the University of Michigan. Amar is currently associate professor of electrical engineering and biomedical engineering at Wayne State University. His research, supported primarily by the NSF, focuses on microfluidic and microelectronic instrumentation for high-throughput screening and point of care monitoring. He received the NSF BRIGE award, WSU CoE Outstanding Faculty Award, the IEEE-WSU Professor of the Year, and the Whitaker Foundation Fellowship. More information about his lab can be found at www.microfluidics.wayne.edu.