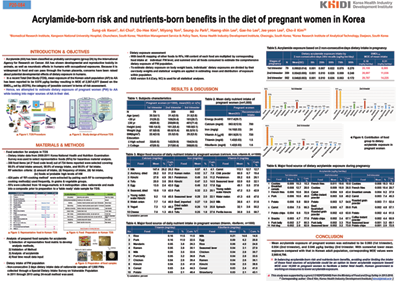 Objectives: Acrylamide (AA) has been classified as probably carcinogenic (group 2A) by the International Agency for Research on Cancer. AA has shown developmental and reproductive toxicity in animals, as well as neurotoxic effects in humans with occupational exposures. Because it is widespread in food and can pass through the human placenta, concerns have been raised about potential developmental effects of dietary exposure in humans. In a recent Total Diet Study (TDS), mean exposure of the Korean adult population (AP) to AA has been reported to be 0.076 μg/kg bw/day resulting in margin of exposure (MOE) of 2,367-4,077 based on the BMDL10 set by JECFA, the category of ‘possible concern’ in terms of risk assessment. Hence, we attempted to estimate dietary exposure of pregnant women (PW) to AA while looking into major sources of AA and some vitamins & minerals in their diet.


Methods: Utilizing the non-consecutive 2 days dietary intake data of 1,000 individuals collected through a Special Dietary Intake Survey on Vulnerable Population in 2011 through 2013 based on 24-recalls, a nationwide representative intake data set for PW was established. Based on AA content in food samples prepared (cooked) in various ways from the aforementioned TDS, AA exposure was estimated and food sources of AA and some important nutrients were identified.


Results: Mean AA exposure of PW was estimated to be 0.060 μg/kg bw/day (1st trimester), 0.054 μg/kg bw/day (2nd trimester) and 0.046 μg/kg bw/day (3rd trimester). With somewhat lower mean exposure compared with that in AP, corresponding MOE values were 2,985-6,796. The foods contributed to AA exposure mostly (more than 50%) in PW were cookies, French fries, breakfast cereals, carrots and roasted grain powder while black pepper was the top AA contributor in AP. Although calcium and iron intake adequacy is low (60-80% of RDA) in Korean PW, none of these foods turned out to be a significant source of either nutrient.


Conclusions: Altogether, in balancing AA-born risk and nutrients-born benefits, avoiding those foods could be an option to lower AA exposure to MOE over 10,000 during pregnancy to facilitate a better fetal health. Korean government is working on measures to lower AA exposure.