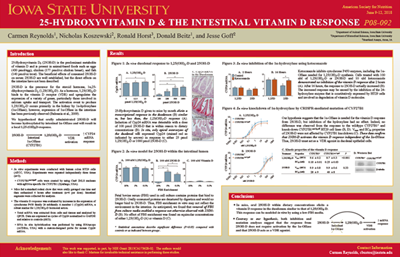 OBJECTIVE: Hydroxylation of 25-hydroxyvitamin D3 (25-D) yields the vitamin D hormone, 1α,25-dihydroxyvitamin D3 (1,25-D). This activation event occurs in the kidney; however, extra-renal expression of 1α-hydroxylase (1α-OHase) in the intestines has been observed (Balesaria et al., 2009). This observation suggests that 25-D derived from the diet can elicit hormonal effects within the intestines. We hypothesized that orally administrated 25-D will result in a local 1,25-D-response following activation by intestinal 1α-OHase.

METHODS: We investigated the activity of 25-D in the intestines by assessing the response to a single oral dose of 25-D or 1,25-D in mice. Responses were evaluated by the increased expression of Cyp24 mRNA, a reporter gene for vitamin D receptor (VDR) stimulation. In situ hybridization (ISH) with RNAscope was performed to identify responsive cells in the intestine. An in vitro model with the HT29 human colon cancer cell line was developed to mimic the apical enterocyte environment. By using this model, we manipulated the activity of 1α-OHase through ketoconazole inhibition and CRISPR gene editing, then measured the responses to 25-D and 1,25-D treatments.

RESULTS: Mice that were orally administered with 25-D demonstrated increased expression of Cyp24 mRNA in the duodenum similar to, but less than, 1,25-D treatment. RNAISH revealed that the Cyp24 mRNA responses from both treatments were localized to the epithelial cells of the intestines. In vitro, the enterocyte model enabled a response to 100 nM 25-D treatment that was not observed under standard cell culture conditions. Concentration curve analysis comparing 1,25-D with 25-D revealed identical Vmax properties, but a difference in EC50 values of approximately 160-fold. Inhibition of 1α-OHase by using media with 10 uM ketoconazole did not diminish the response to 1,25-D or 25-D treatments. Preliminary results with CRISPR knock-down of 1α-OHase suggest no differences for Vmax and EC50 values with 1,25-D or 25-D treatments.

CONCLUSION: While it is plausible that 25-D can be hydroxylated to 1,25-D in the intestines, it is evident that 25-D elicits a response without the need for 1α-OHase or 1,25-D synthesis. Thus, 25-D acts as a direct ligand agonist for VDR in the intestinal epithelium.