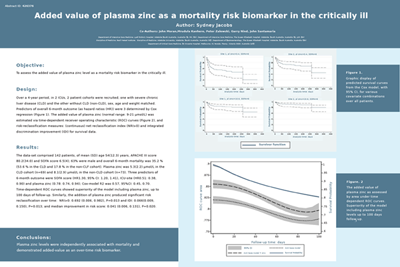 Objective: To assess the added value of plasma zinc level as a mortality risk biomarker in the critically ill.

Funding Source: Only funding received was for plasma zinc determinations in the match control group of patients. The funding came from the Department of Intensive Care at the Lyell McEwin hospital, Haydown Road, Elizabeth Vale South Australia 5112.
Figure 1. Graphic display of predicted survival curves from the Cox model, with 95% CI, for various covariate combinations over all patients.

Figure 2. The added value of zinc as assessed by the area under time dependent ROC curves. Superiority of the model including plasma zinc levels up to 100 days follow up.