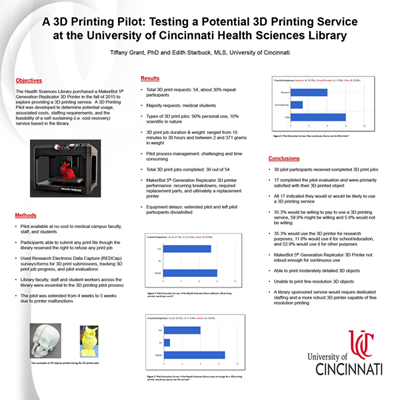 Objectives: The Health Sciences Library purchased a MakerBot Replicator 3D Printer in the fall of 2015 to explore providing a 3D printing service. A 3D Printing Pilot was developed to determine potential usage, associated costs, staffing requirements, and the feasibility of a self-sustaining (i.e. cost recovery) service based in the library.


Methods: The pilot was available at no cost to faculty, staff, and students on the medical campus. Pilot participants were able to submit files of their choosing, though the library reserved the right to refuse any print job. The pilot submission process was done through Research Electronic Data Capture (REDCap) which collected all information from the original submission file to a 3D printer pilot evaluation survey which was sent to participants after the print job was picked up. The REDCap project included two surveys that were filled out by the participant and two data entry forms filled out by library faculty and staff. Staff from multiple areas of the library were essential to the 3D printing pilot process. The pilot was to be done over a 4 week period but printer malfunctions extended the pilot another month.


Results: There were a total of 54 3D print requests, many of which were repeat participants. The majority of print jobs were for personal use although a few were scientific in nature. Print job duration ranged from ten minutes to thirty hours and were between 2 and 371 grams in weight. The pilot process management was challenging. Of the 54 print requests submitted, only 30 print jobs were completed during the pilot. During the pilot period, the MakerBot 3D printer required replacement parts and ultimately a replacement printer. These requirements caused delays, extended the pilot, and left pilot participants dissatisfied.


Conclusions: Pilot participants who received their print jobs were primarily satisfied with their 3D printed item, and most indicated they would use a 3D printing service if offered, although fewer were certain they would be willing to pay for the service. Although the MakerBot Replicator was able to print some relatively detailed 3D print jobs, it was not clear this model would be able to print more intricate designs. Nor is this model robust enough to endure continuous use as a library sponsored service. Dedicated staffing and a different 3D printer make would also be required.

Edith Starbuck is an Associate Information Services Librarian at the University of Cincinnati Donald C. Harrison Health Sciences Library. Her primary responsibilities lie in the areas of information retrieval and management, evidence-based practice and database instruction, course development, search strategy/systematic review consultation and instructional technology. She also has responsibilities for electronic resources collection development, journal management, LibGuides administration, and managing the library’s website and blog. Additionally, she serves as the liaison to the UC College of Pharmacy for curriculum and resource development.

In my current role at the University of Cincinnati, I serve as a liaison between the Health Sciences Library and the College of Medicine research community. My role is to help facilitate stronger research collaborations as well as provide innovative data and information resources. Some of my more recent tasks have included providing data management training and support, one-on-one research consultations, and bioinformatics support services. I am currently working on developing a suite of workshops focused on tools that will help biomedical researchers with several phases of high throughput data analysis, from identification of differentially expressed gene to functional categorization of these genes.