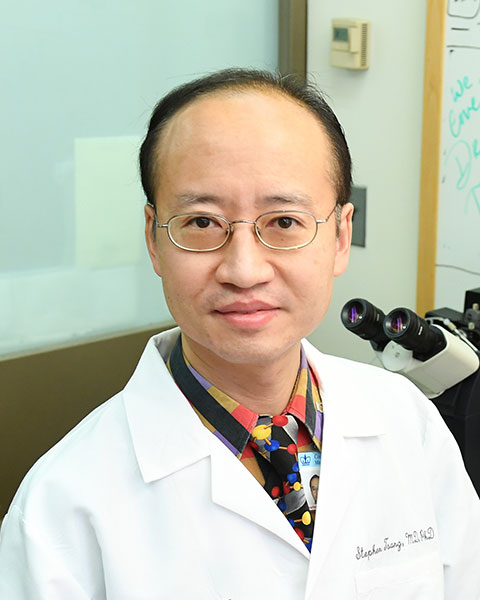 Stephen Tsang, MD, PhD was a student and instructor at the Vinit Mahajan’s CRISPR genome surgery course at ARVO. In 2004, he returned to Columbia where he directs the electroretinogr am (ERG) service. He is salaried by National Institutes of Health U54OD020351, R01EY026682, R01EY024698, R01EY018213, R21AG050437, and NYstem C029572. Dr. Tsang is one of a handful of clinicians who direct the full spectrum of bench-to-bedside research. His research on cGMP-phosphodiesterase (PDE6) is a case in point. PDE6 defects lead to retinitis pigmentosa (RP) in 72,000 people worldwide. He generated the world’s first recessive model of RP (a PDE6 mutant) with genome engineered stem cells, and then used these mice to dissect the underlying pathophysiology. These studies led to novel and fundamental discoveries on PDE6 regulation of G-protein-coupled-receptor signaling and, eventually, preclinical testing in the same mice; of the different therapies tested, viral-gene therapy is slated for clinical trials. Dr. Tsang’s electrophysiology service at New York-Presbyterian Hospital evaluates and cares for patients with the most complicated hereditary and inflammatory retinal diseases in the New York area and beyond. His skills were recognized by a resident teaching award, the Burroughs Wellcome Fund, and through his election to the Diseases and Pathophysiology of the Visual System (DPVS) Study Section, American Society for Clinical Investigation, American Ophthalmological Society, Carl Camras Award, and 11th Bradley Straatsma Lectureship.

Dr. Tsang graduated from Johns Hopkins University, where he received training in medical genetics under the tutelage of Victor A. McKusick. He was awarded an NIH-National Institute of General Medical Sciences Medical Scientist Training Program (MSTP) scholarship to obtain an MD/PhD at Columbia University. Following medical school, he completed the EyeSTAR residency at UCLA, and an electrophysiology fellowship with Alan C. Bird, Graham E. Holder, Sue Lightman and Anthony T. Moore.