Track 4: This New World: Preservation technology and emerging issues within our historic buildings and built landscapes

3 - Gordon Hall - The Structural Investigation of a Marble Clad Facade

Gordon Hall is one of five buildings designed by Shepley, Rutan, and Coolidge Architects in 1906 as part of the Harvard Medical School quadrangle on Longwood Avenue, in Boston, Massachusetts. It stands at the south end of the quadrangle and has become the flagship building for the Harvard Medical School campus. The structure of the building consists of a thick marble façade that clads the exterior brick bearing walls. The structure is framed with steel interior floors supported on steel columns. The building has large porticos on both the north and south elevation, each supported by six large marble columns.

The varied aesthetic of the marble façade is one of its architectural features that most stands out and is most treasured. Originally quarried for the New York Public Library, the marble was rejected based on its inconsistent coloration among individual pieces. The contractors, who were working on both Gordon Hall and the NYPL, convinced Harvard Medical School to clad Gordon Hall – and the four other buildings around the quadrangle – using these discarded pieces. Therefore, right before construction began, the façade design for Gordon Hall, originally to be brick clad, was changed to support a marble façade.

We will present the implications of this design change and how the marble has fared over time in this paper session. Beginning in 2015, Silman, under the direction of McGinley Kalsow & Associates, conducted a structural investigation of select façade conditions at Gordon Hall. The assessment of these elements identified certain design flaws in the conversion of the façade from the original brick design to marble. This investigation led to sections of the column capitals being replaced, the steel lintels behind the entablatures being reinforced, and an impressed current cathodic protection system installed. The builders overestimated the durability of unprotected steel elements incorporated into the masonry façade; our investigation identified certain deteriorated façade elements as moisture migrated through the building. 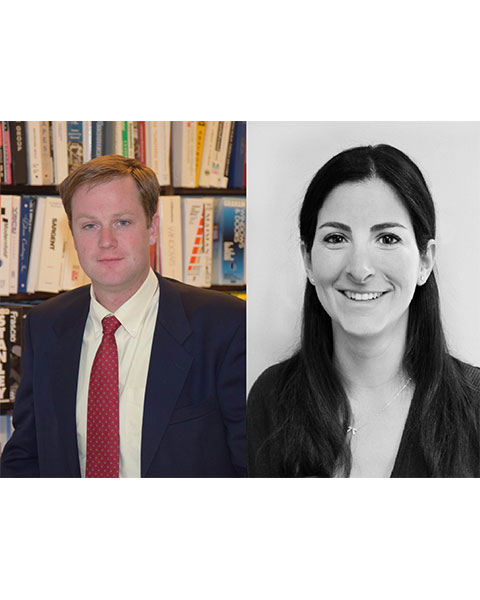 Jenna Cellini Bresler is a Senior Project Engineer at Silman in Boston, MA. She joined Silman in 2008 as the fourth Robert Silman Fellow for Preservation Engineering at the National Trust for Historic Preservation, focusing on the preservation and maintenance of modern heritage. She is a graduate of the University of Pennsylvania’s Historic Preservation Master of Science program and holds a Bachelor of Science in Civil Engineering and a Bachelor of Arts in Art from Lafayette College. Jenna has previously lectured at APTi, ACI, and the KWAH conferences. She currently resides in Ann Arbor, MI.

Ryan Foster, AIA, is a preservation architect and Associate Principal at McGinley Kalsow and Associates, Inc. in Sommerville, MA, specializing in the assessment, preservation, renovation, and adaptive reuse of historic buildings. His expertise with traditional buildin materials and methods complements his focus on integrating historically significant buildings with modern systems and uses. With over 15 years of experience, Mr. Foster utilizes Building Integrated Modeling (BIM) to coordinate projects through all phases of design and construction administration, including feasibility studies and conditions assessments. He excels in Revit modeling and 3-dimensional design tools, allowing for increased understanding of complex buildings as well as creativity and greater precision in adaptive reuse projects. Mr. Foster believes that technology is key to the long-term preservation of historic buildings and that utilizing BIM technology to understand and showcase the potential of historic buildings is key to promoting preservation.

3 - Gordon Hall - The Structural Investigation of a Marble Clad Facade