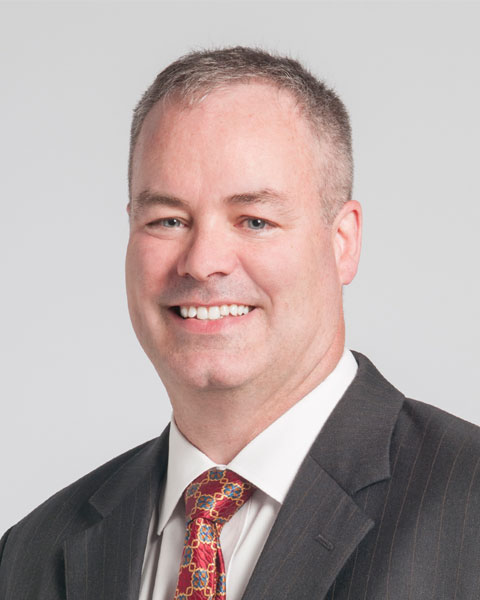 Sean Lyden, MD, is the Chairman of the Robert and Suzanne Tomsich Department of Vascular Surgery at Cleveland Clinic’s Sydell and Arnold Miller Family Heart & Vascular Institute. He also serves as Chief Medical Officer of Excelerate Strategic Health Sourcing, a venture between Cleveland Clinic and VHA Inc. to save health care organizations money with a provider-led, physician-engaged sourcing company. He has clinical interests in abdominal aortic aneurysms, carotid artery disease, and lower-extremity endovascular treatments. He currently is involved in more than 16 clinical trials studying various topics including thoracic, fenestrated and abdominal stent grafting; lower extremity interventional therapies with atherectomy and drug coated balloons; carotid stenting; and deep venous thrombosis treatments. Dr. Lyden has presented his research and clinical findings at more than 80 national and international medical symposia and conferences. He serves on the editorial boards of Endovascular Today and Annals of Vascular Surgery and serves as reviewer for several journals, including the Journal of Vascular Surgery, Annals of Vascular Surgery and the Journal of the American College of Surgeons. He has authored and co-authored over 60 articles in leading publications, including the Journal of Vascular Surgery, Vascular Medicine and Journal of Endovascular Therapy. He also has also authored chapters in several vascular textbooks. Dr. Lyden is a Fellow of the American College of Surgeons and has been recognized as a Distinguished Fellow of the Society for Vascular Surgery. He is also a member of many regional vascular societies including the Midwestern Vascular Surgical Society.