Macrolides are important antimicrobials that may be useful agents for the control of infectious ovine abortion, which has economic, animal health, and human health impacts. Pregnant ewes were given a single dose of 2.5mg/kg tulathromycin subcutaneously and drug concentrations were measured in fetal plasma, maternal plasma, and amniotic fluid. Catheters were surgically placed in the fetal vasculature and the amnion at 115 (+ / - 2 ) days gestation for sampling at 4, 8, 12, 24, 36, 48, 72, 144, and 288 hours after administration. Maternal plasma samples were collected at time points of 0, 2, 4, 6, 8, 12, 24, 36, 48, 72, 144, and 288 hours. Serum concentrations and pharmacokinetic values in the ewe were similar to those previously reported in non-pregnant ewes. Tulathromycin was present in fetal plasma and amniotic fluid, indicating therapeutic potential for use against organisms in these compartments, though concentrations were lower than those found in maternal plasma. Notably, the pharmacokinetics in the fetus were quite different than those found in the ewe, with plasma concentrations reaching a plateau at 4 hours and remaining at this concentration for the remainder of the sampling period (288 hours), raising questions about how this drug is handled and metabolized in the fetus. 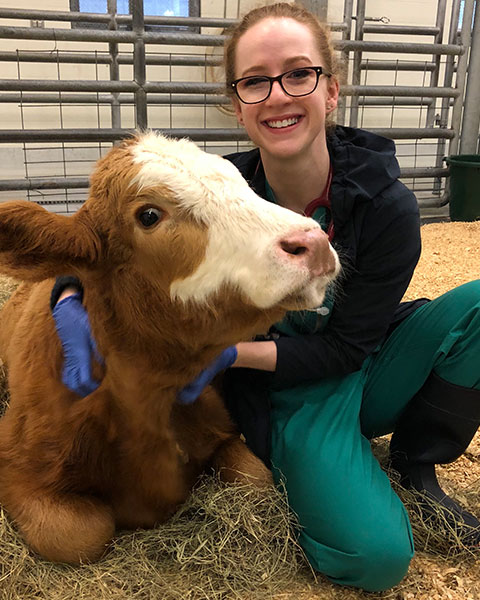 Evelyn MacKay graduated with her DVM from the University of Missouri before completing an internship in Farm Animal Medicine & Surgery at the Ohio State University. She is currently completing an residency at Texas A&M University, where she especially enjoys neonatal care and swine medicine.