Repetitive transcranial magnetic stimulation (rTMS) is a non-invasive, safe and painless procedure that is applied in humans to modify the activity of specific neural circuits of the brain. Via electromagnetic induction, a magnetic field generator produces small electric currents on cortical neurons in order to affect neuronal function. The antiepileptic effect of rTMS has been demonstrated in humans with drug-resistant epilepsy. Therefore, a single-blinded randomized placebo-controlled clinical trial was designed to assess the efficacy and safety of rTMS in dogs with drug-resistant idiopathic epilepsy.

After random assignment into the treatment or placebo group, dogs received active or sham stimulation, respectively. All dogs in both groups were sedated during the whole procedure using the same anesthetic protocol. Both groups received repetitive active or sham stimulation for 90 minutes per day for five consecutive days in total. The efficacy of the procedure was evaluated by comparing monthly seizure frequency (MSF) and monthly seizure day frequency (MSDF) during a retrospective 3-month period with a prospective 3-month follow-up period. Three months after sham stimulation, the dogs in the placebo group also received treatment. Adverse effects and complications were reported.

Until this stage, five dogs were included, four in the treatment and one in the placebo group. In the treatment group, both median MSF and MSDF decreased (P = 0.1 and P = 0.059, respectively) showing a statistical trend of potential interest. In the placebo group, the limited sample size (n = 1) does not permit statistics at the current stage. However, this dog did show no reduction in seizure frequency following sham stimulation, while the seizure frequency reduced by 94% when the dog received active stimulation afterwards. Overall, the procedure seems safe as no significant or serious adverse effects or complications were reported.

In conclusion, these preliminary results suggest that rTMS is a safe procedure that might decrease median MSF and MSDF and result in an improvement in seizure management in dogs with drug-resistant epilepsy. However, a larger number of dogs is required for both groups before definitive conclusions can be made. 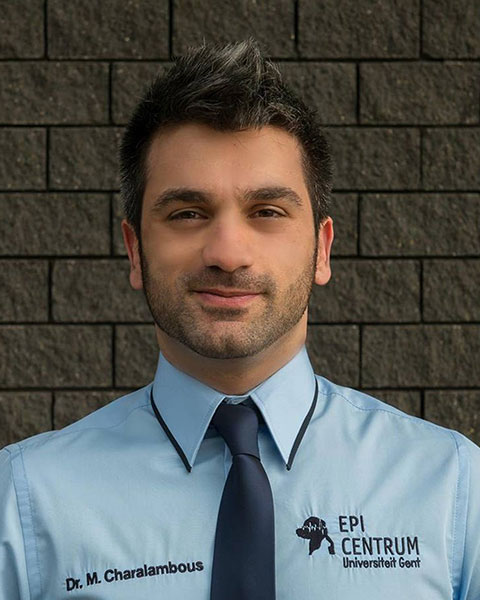 Marios Charalambous graduated from the Aristotle University of Thessaloniki (Greece) in 2010. After completing his small animal rotating internship at Queen's Veterinary School Hospital at the University of Cambridge (UK), he worked in general and emergency private practice in UK and also pursued a Master of Science (MSc) in Advanced Neuroimaging at the University College London (UCL) Institute of Neurology (UK).

Marios Charalambous worked and started his training in Neurology at Cornell University (USA) before joining Ghent University (Belgium) in September 2016 as a resident in Neurology and Neurosurgery. Marios Charalambous has a strong academic background and significant research interest as well as several high-impact publications mainly in the field of epilepsy treatment.

He participated in multiple training programs and courses hold by Universities within the UK and USA, including Iowa State University and Royal Veterinary College (UK), all with strong neurology service. He has also achieved the ESVPS post-graduate Certificate in Neurology after attending courses, writing thesis and passing exams. He was recognized as a Chartered Scientist by the Science Council (UK) and as a Fellow of the Higher Education Academy (FHEA) after completing relevant courses at the Royal Veterinary College (UK).

He has been a reviewer in high-impact veterinary journals such as Journal of Veterinary Internal Medicine and BMC Veterinary Research. He is currently the representative of the European Society of Veterinary Neurology (ESVN) and leads research projects on epilepsy within Ghent University and in collaboration with other American and European institutions.