Obesity in pet dogs is an increasing problem associated with morbidity, shortened life span and poor life quality. As overweight dogs exhibit postprandial hyperlipidemia it is of interest to identify specific metabolite changes. This study aimed to investigate postprandial metabolites related to lipid metabolism in a feed-challenge test and to identify alterations related to overweight in dogs. Twenty-eight healthy male Labrador Retriever dogs were included, 12 of which were classified as lean (body condition score (BCS) 4-5 on a 9-point scale) and 16 as overweight (BCS 6-8). After overnight fasting, plasma samples were collected and dogs were fed a high-fat meal followed by postprandial plasma sample collection hourly for 4 hours. High-resolution liquid chromatography–mass spectrometry (LC-ToF-MS) was used, and selected metabolites were evaluated based on relative signal areas in mixed model repeated measures analysis. In all dogs, propionylcarnitine and stearoylcarnitine increased in response to food intake (P ≤ 0.005) while the metabolite C18:1 decreased (P = 0.0003), resembling findings in humans. The overall taurine, carnitine and acetylcarnitine responses were lower in overweight compared to lean dogs (P ≤ 0.017). Notably, in lean dogs the acetylcarnitine signal area was higher than in overweight dogs at fasting (P = 0.001) and was decreased one hour postprandially (P < 0.0001), while in overweight dogs there was no response to feeding. In conclusion, the lower signal areas of taurine and carnitine in overweight dogs suggest the possibility of deficiencies in this group. Moreover, the acetylcarnitine pattern in overweight dogs could indicate decreased fatty acid oxidation at fasting and metabolic inflexibility to food intake. 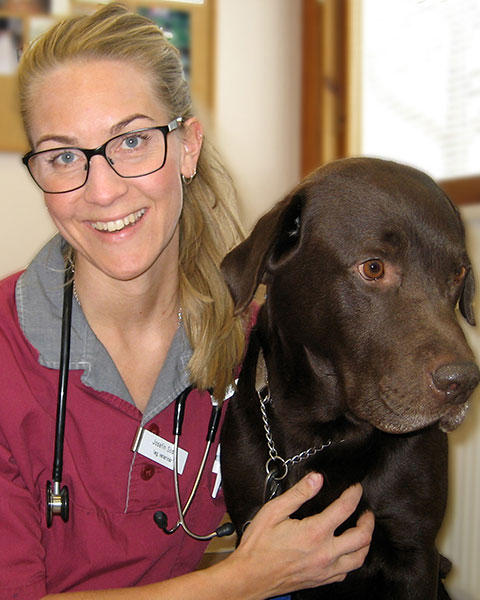 I am a veterinarian that is about to finish my PhD within the subject "Obesity-related metabolic dysfuntions in overweight Labrador Retriever dogs", at the same time working as a teacher in anatomi and physiologi at the Swedish University of Agricultural Sciences.