Miniature Schnauzers are predisposed to idiopathic hyperlipidemia (IH), which is characterized by fasting hypertriglyceridemia (HTGL) with or without hypercholesterolemia (HCHOL). Our previous data suggest that IH is associated with subclinical inflammation in this breed. IH is considered a risk factor for several pathologic conditions including pancreatitis, reduced gallbladder motility, proteinuria, and might also lead to insulin resistance (IR), which can be evaluated by the homeostatic model assessment for insulin resistance (HOMA-IR) score. Increased serum concentrations of calprotectin were associated with IR in people, but such an association has not been reported for dogs. Thus, the aim of this study was to evaluate indicators of IR in a population of Miniature Schnauzers.
Serum samples from 150 clinically healthy Miniature Schnauzers were used for this study. A study questionnaire was completed for each dog to confirm the health status and medication history. Serum triglyceride, cholesterol, glucose, and calprotectin concentrations were measured in all samples. Paired serum samples were available from 16 of the dogs with IH 14–26 weeks after starting an ultra-low fat diet. In addition to serum triglyceride, cholesterol, glucose, and calprotectin, the concentration of serum insulin was measured in all samples, and the pre-treatment HOMA-IR was calculated as [(insulin [mU/L] x glucose [mmol/L])/22.5]. Statistical analyses were performed using non-parametric (paired or unpaired) group comparisons and likelihood ratio tests.
A total of 71 dogs (47%) were diagnosed with IH, of which 51 had HTGL, 7 HCHOL, and 13 had combined IH. Serum glucose concentrations did not differ between dogs with normal vs. increased serum calprotectin concentrations in either the hyperlipidemic or the normolipidemic group (all P > 0.05). In the 16 dogs with IH included in the ultra-low fat dietary trial (n = 6 with isolated HTGL, n = 9 with combined IH), the HOMA-IR was significantly higher in dogs with increased vs. normal serum calprotectin concentrations (P = 0.0430), but no significant difference was seen in serum insulin or glucose concentrations. Dogs with combined IH had significantly higher HOMA-IR (P = 0.0216), serum insulin concentrations (P = 0.0443), and a higher proportion of dogs with increased serum calprotectin concentrations (P = 0.0249) than dogs with isolated HTGL, but no difference in serum glucose concentration was detected. Resolution of IH through dietary intervention with an ultra-low fat diet was associated with a decrease in serum insulin concentrations (P = 0.0472) but increased serum calprotectin concentrations (P = 0.0229).
These results suggest that the presumed subclinical inflammatory phenotype in Miniature Schnauzers with IH is associated with an increased IR. The findings lend further support to the ambivalent pro- vs. anti-inflammatory properties of calprotectin. 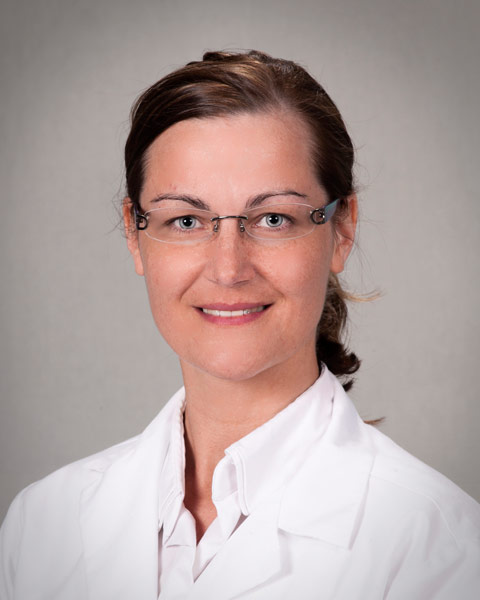 After attending the College of Veterinary Medicine in Leipzig (Germany) and the Vetsuisse Faculty of Bern University (Switzerland) I graduated with my veterinary degree from the University of Leipzig in 2005. I subsequently worked for several months in a small animal general practice in Germany, after which I returned to academia to complete my first postgraduate doctoral degree in veterinary medicine (Dr.med.vet.). The research work for this degree was completed at Texas A&M University and the Dr.med.vet. degree was conferred by the University of Bern (Switzerland) in 2008. I then pursued a rotating small animal veterinary internship at the Veterinary Referral Center TÜZ in Tenniken (Switzerland). From fall of 2008 until July 2015, I was enrolled in a combined Small Animal Internal Medicine (ACVIM-SAIM)/PhD program at Texas A&M University. I returned to Europe in 2015, where I took the position of head of internal medicine at the small animal veterinary specialty center Hünenberg (Switzerland) and in Spring of 2016 was appointed professor and section chief of small animal internal medicine at the University of Leipzig (Germany). My research involves the development and clinical evaluation of novel diagnostic tools and potential targeted treatment options in dogs with chronic enteropathies and other autoinflammatory diseases.