Lunasin, a 43-amino acid peptide has been reported to reduce the production of inflammatory mediators through suppression of NF-kB pathway in medicine. Fibroblast growth factor-2 (FGF-2) is a family of growth factors that plays an important role in the proliferation and differentiation of stem cells during the regeneration process. FGF-2 levels have been shown to be regulated through NF-ƘB pathway. No study has investigated the effect of Lunasin on the level of FGF-2. Therefore, the purpose of this study was to investigate the effect of Lunasin on FGF-2 release from activated macrophages. We hypothesized that Lunasin could significantly increase the level of FGF-2 release from activated macrophages. THP-1 cell lines that resemble human macrophages were used. After exposure to phorbol-12-myristate-13-acetate (PMA), THP-1 cells differentiated into macrophages. Activated macrophages were then divided into different groups and treated with: Lunasin (25 μM, 50 μM and 100 μM), inactive Lunasin, LPS (positive-control), and no treatment (negative-control). Levels of FGF-2 were measured using enzyme-linked immunosorbent assay (ELISA). Data was analyzed using one-way ANOVA and post hoc Tukey's test (α=0.05). Lunasin 100 μM was the only group that significantly increased the level of FGF-2 compared to the negative control group (p≤.05). However, inactive Lunasin-treated-macrophages showed the least amount of FGF-2 level compared to Lunasin 100 μM and positive control groups (p≤05). The increased levels of FGF-2 following Lunasin 100 μM treatment may improve the clinical outcome of the endodontic regeneration due to possible enhanced differentiation capability of stem cells in the regenerative protocol. 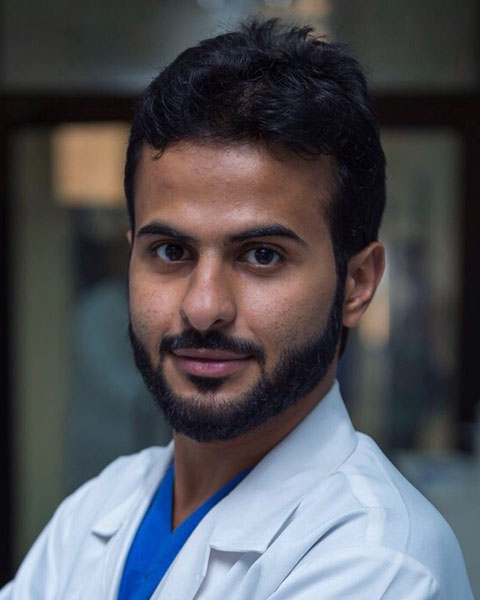 graduated from Qassim University in Saudi Arabia in 2013 and served as a teaching assistant in the Endodontics department there e. He also participated in an exchange
program with the Herman Ostrow School of Dentistry at USC for two months.