Immune homeostasis in the intestine is tightly controlled by FOXP3+ regulatory T cells (Tregs); loss of Treg-mediated control is linked to inflammatory bowel disease (IBD). As a mechanism of immune evasion, some intestinal parasites can strengthen Treg activity, indicating that parasite-derived products could be harnessed and used as immunotherapy for IBD. It has been previously demonstrated that Heligmosomoides polygyrus, a natural murine parasite, secretes a molecule which mimics the ability of mammalian TGF-β to induce FOXP3 expression in CD4+ T-cells. To determine whether this molecule (TGM), promotes the development of human FOXP3+ Tregs, naïve CD45RA+CD4+CD25– T cells were stimulated with anti-CD3/CD28 mAbs in the presence of TGM or TGF-β. We found TGM efficiently induced FOXP3 expression (>50%) in naïve CD4+ T-cells, and caused loss of methylation at the Treg-specific demethylated region (TSDR) of FOXP3 to a greater extent than TGF-β, indicative of stable lineage differentiation. We performed the same experiments with sorted ex vivo human Th1, Th2 and Th17 cells and, surprisingly, found that TGM (and to a lesser extent TGF-β) promoted the conversion of Th1 and Th17, but not Th2 cells, into FOXP3+ cells which acquired regulatory function and lost methylation at the TSDR. TGM also induced IL-10 production and stabilised the phenotype of CD25+CD127– Tregs in vitro. These data indicate that TGM could potentially be used to generate Tregs to treat IBD, and via its ability to convert Th1 and Th17 cells into regulatory cells, may have a unique capacity to reverse harmful pro-inflammatory effects of these cells.

Send Email for May Wong 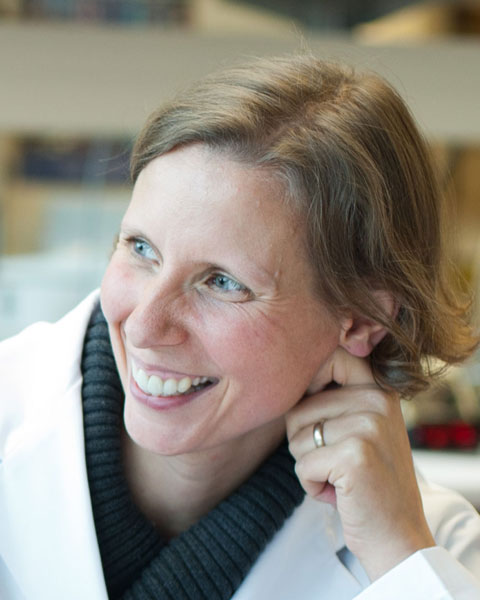 Dr. Megan Levings has been in the UBC Department of Surgery since 2003 when she was recruited back to Canada as a Canada Research Chair in Transplantation. In 2011 she joined the BC Children’s Hospital Research Institute where she now heads the Childhood Diseases Theme. Dr. Levings’ scientific career started with summer research positions in a fruit fly genetics lab at Simon Fraser University. She then did her graduate training in the genetics program with Dr. John Schrader at UBC. In 1999 she joined Dr. Maria Grazia Roncarolo's lab in Milan, Italy, undertaking postdoctoral training in the emerging area of immune regulation. She was among the first groups to show that a special kind of white blood cell, known as a T regulatory cell, could be used as a therapy to stop harmful immune responses. She continues this line of research at UBC, and is now internationally recognized in the field of human immunology and chairs the Federation of Clinical Immunology Societies Centres of Excellence. She leads a vibrant group of trainees and staff who are researching how to use T regulatory cells to replace conventional immunosuppression in the context of transplantation and autoimmunity.