A major program is currently underway to rehabilitate Canada's historic Parliament Buildings in Ottawa. Centre Block must be restored structurally (including a major seismic upgrade), modernized to current standards, and rehabilitated to provide functional parliamentary and visitor facilities that meet the technical expectations of the 21st century. The planning for the major rehabilitation of Centre Block is currently underway, with the work slated to begin in 2018 until 2028. To better design the seismic upgrade of Centre Block, the dynamic characteristics of this heritage building need to be estimated from acquired data of future seismic events.

NRC was mandated to select, procure, and install a network of seismometers at Centre Block to monitor vibration data from seismic events. The vibration monitoring system, installed in February 2016, consists of a central recorder, hard-wired to ten tri-axial accelerometers located on three floor levels, which is planned to stay in operation until at least the onset of rehabilitation work.

From a review of the vibration data recorded in the past twelve months and a preliminary modal analysis, the following conclusions are drawn:
• Five earthquake events have been detected by the monitoring system; however, they had low magnitudes (between M 2.8 and 3.4), with epicentre distances from Centre Block ranging from 56 km to 176 km. Unfortunately, none of them were strong enough to generate a building response suitable for modal analysis. For example, the maximum peak acceleration response was 0.015% g.
• Eight non-earthquake events have been detected, including blasting-induced ground motion from nearby construction sites, and sound waves induced from the firing of cannons as part of ceremonies on Parliament Hill. Some of these events generated significant building responses with a maximum peak acceleration of 2.4% g.
• Signal processing of the data from the 10 tri-axial accelerometers confirmed that the cannon-generated sound waves were suitable for conducting operational modal analysis by meeting these two requirements regarding input forces: (i) derived from white noise (i.e. constant power spectral density over the frequency bandwidth of interest) and (ii) applied at multiple points on the structure.
• Preliminary operational modal analysis was conducted using two different methods: the Enhanced Frequency Domain Decomposition method, and the time-domain Stochastic Subspace Identification method. Both methods gave nearly identical results, which were validated by analytical results from an independent dynamic study of Centre Block.
• Seven natural frequencies (from 4.0 to 8.5 Hz) were identified by both methods within the frequency range of interest (0-10 Hz), along with corresponding damping ratios (up to 2.7% of critical).
• Above findings demonstrate the potential of operational modal analysis using ambient vibration data to estimate a building’s dynamic characteristics such as natural frequencies, and damping ratios. 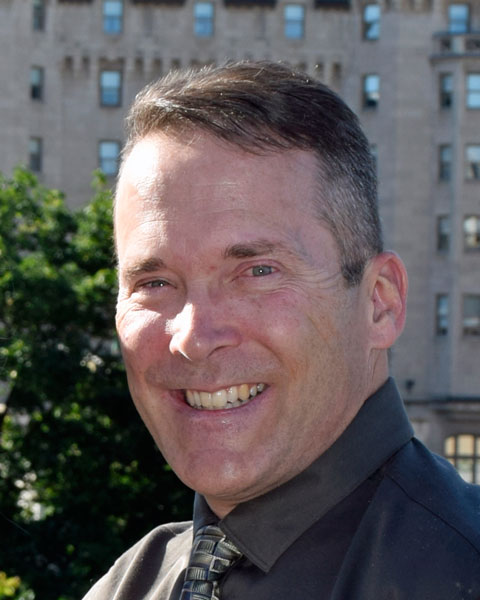 Dr. Cusson is Senior Research Officer at National Research Council Canada. He earned his Ph.D. in Civil Engineering from Université de Sherbrooke (1993) and Postdoc at LCPC in Paris (1994). His expertise combines field testing, remote monitoring, numerical modeling, and service-life prediction of bridges and buildings. He is member of several ACI and RILEM committees.